Hurricane Harvey, which is now a Category 3 hurricane, will have an impact on all states along the Gulf Coast, although Texas is getting the brunt of the storm. Outer bands of rain will reach as far east as the Florida panhandle, with Mobile and the rest of South Alabama in between. Here is a look at how Hurricane Harvey could impact residents in Mobile.

As AL.com notes, the storm has been moving at 10 mph and is expected to stall over the Texas coast for days. The National Oceanic and Atmospheric Administration estimates that isolated parts of the Texas Gulf Coast could see as much as 35 inches of rain through Wednesday. Other areas could see between 15 and 25 inches. As of 2:00 p.m. CDT on Friday, it had sustained winds of 120 mph. The storm surge is expected to be six to 12 feet.

However, Mobile and other parts of Alabama are not expected to see as much rain. According to WKRG meteorologists, Harvey is expected to make its biggest impact in the Mobile area in the surf. “Watch for swells and dangerous rip currents increasing today and a high risk of rip currents will last at least through the weekend,” the network reports.

WKRG notes that Mobile will likely see some showers, but it will be typical rain for this time of year. High temperatures are expected to reach the mid-80s to low-90s, with muggy nights reaching lows in the mid-70s. However, as next week goes on, Mobile residents could see more rain due to Harvey’s outer bands.

“A 40 percent chance of showers and thunderstorms. Mostly cloudy, with a high near 91. Northeast wind around 5 mph,” the National Weather Service forecast for Saturday reads.

The NWS Sunday forecast reads, “A 30 percent chance of showers and thunderstorms. Cloudy, with a high near 87. East wind around 10 mph.” The NWS notes that there will be higher changes of precipitation as the week goes on.

AL.com notes that another way Harvey can impact Alabama and the other Gulf Coast States is through higher gas prices. Corpus Christi and Houston refineries supply gas to Texas, Louisiana, Alabama and Florida, meaning that you could see higher gas prices in those states.

“A hurricane like this typically causes an increase in fuel purchases in the market and a slowdown in retail demand,” Jeanette Casselano, AAA spokesperson, said in a statement. “Spikes in pump prices due to the effects of hurricanes tend to be brief but dramatic. This impact is starting in Texas, where the average price for unleaded gas has already jumped up two cents since Tuesday to $2.15/gallon.” 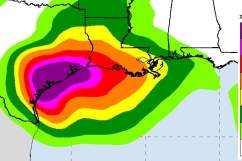 Loading more stories
wpDiscuz
0
0
Would love your thoughts, please comment.x
()
x
| Reply
Hurricane Harvey will make landfall far from Alabama, but it could still make an impact on residents in Mobile. Here's a look at the latest forecasts.