CNN has cut ties with pro-Trump political commentator Jeffrey Lord after he tweeted “Sieg Heil” at a prominent liberal activist during a Twitter fight on Thursday, the news network reports.

“Nazi salutes are indefensible,” a CNN spokesperson said in a statement posted by the network. “Jeffrey Lord is no longer with the network.”

Lord told CNN’s Brian Stelter, “I love CNN, but I feel they are caving to bullies here,’ adding that his contract was set to expire at the end of the year. He told Stelter he greatly respects CNN management despite their decision. He also tweeted simply, “LOL,” after the news broke.

Lord was said he was on his way from Harrisburg, Pennsylvania, to New York in a CNN town car when he heard he was being fired, according to the New York Times’ Michael Grynbaum.

Just talked to @realJeffreyLord. He was in his CNN town car on way from Harrisburg, PA to NYC when he got the call. The car turned around.

Grynbaum added that Lord expects to sign a book deal on Trump:

Jeffrey Lord told me he’s on the verge of inking a deal for a book on Trump. Tentative title: THE LION AT THE GATE.

Fox News and MSNBC told journalist Yashar Ali that they will not be hiring Lord. Ali also tweeted, “I’m told by two sources that two prominent CNN anchors made it clear to management that Lord’s tweet was an inexcusable red line. … You can’t say those words unless you’re making a sober historical (reference) Plus Lord had worn out his welcome. Some anchors/staff were done.”

He joined the network as a Republican voice in support of Trump in August 2015. Lord worked in the White House during the administration of President Ronald Reagan as associate political director. Along with his work for CNN, Lord is an author and a columnist for The American Spectator. He has also written for National Review Online, the Wall Street Journal and the Washington Times.

The tweet was directed at Angelo Carusone, the president of Media Matters for America, a liberal group. In a statement, Carusone said he was calling for Lord to be let go by CNN.

A bunch of people have asked if Media Matters is calling for Jeffrey Lord to be fired for issuing the Nazi victory salute. Here's my answer: pic.twitter.com/60DmvwTVWG

“When you issue a call for someone to be fired, it’s because they have violated some standard they’re held against. Even in the instances when Media Matters has called for Fox News personalities to be fired, it is because the person violated some ostensible Fox News standard,” Carausone wrote on Twitter two hours before Lord’s dismissal. “As evidenced by his disruptive, deceitful and disturbing on-air conduct, CNN does not seem to hold Jeffrey Lord to any kind of standard. Since CNN doesn’t apply any standards to him, then how can anyone expect them to hold him accountable? It’s impossible! CNN has given Lord an exception to their standards and allow him to act with impunity.”

“So, maybe it’s time for CNN’s viewers and employees to encourage CNN to start applying the same standards they have for all their employees to Jeffrey Lord,” Carusone wrote. “Why should he get a free pass?”

Media Matters celebrated Lord’s firing on Twitter after it was announced:

CNN has finally cut ties with Jeffrey Lord — Here is some of the insightful commentary they were paying him for: pic.twitter.com/wjzcN59voM

Lord and Carusone have clashed in the past, and the latest feud began earlier this week when Lord wrote a column for The American Spectator attacking Media Matters for its campaign against Fox News host Sean Hannity. Carusone and his group have called for advertisers to boycott Hannity after leading a similar charge against former Fox News host Bill O’Reilly. In the column, Lord called Media Matters a “George Soros funded group” and called them “fascists,” writing:

The objective of Media Matters (and let’s stop with the camouflage and from now on call them what they really are, MMF — Media Matters Fascists), clearly, is to re-write the First Amendment so it will now be modeled after Fascist Italy’s Ministero della Cultura Popolare — Mussolini’s Ministry of Popular Culture. The Ministry was in turn modeled after the Nazi Reich Ministry of Public Enlightenment and Propaganda. Both Mussolini and Hitler’s aim was as simple as it was sinister: to control the flow of information whether that meant broadcast, newspapers, books, films and all the rest of any outlets that were vehicles of the day for the free expression of ideas. …

Let’s be plain. This latest from Media Matters Fascists is straight-up fascism. Question? Who died and left Media Matters, George Soros, and MMF honchos David Brock and Angelo Carusone in charge of free speech in America? As always with fascists, these thugs are out to terrorize sponsors, Sean Hannity’s sponsors in this case, into not buying ads on a television and/or radio show. Note the threat in that MM screed: “Advertisers will get burned if they continue to associate with Hannity — plain and simple.” More of which in a minute.

Also in the column,Lord writes that “Media Matters Fascists” (a twist on the group’s MMFA acronym) wants to change the First Amendment to a version of “The United States Ministry of Popular Culture shall make all laws respecting the exercise of speech; abridging speech as judged necessary by or in the press. All sponsors of speech-related television and radio shows, Internet sites and publications of any kind must seek approval from the Ministry or lose their right to speak in America.”

Lord wrote, “The American Spectator has been unable to confirm reports that the original draft of this Media Matters revision ended with the words: ‘Seig Heil!'”

Carusone responded to the column on Twitter on August 9, writing, “Hey Jeff. Article is bullshit and filled with lies. Soros gave us one donation one time…in 2010. Why are you lying to your readers?” That tweet set off a back-and-forth between Lord and Carusone.

Hey Jeff. Article is bullshit and filled with lies. Soros gave us one donation one time…in 2010.

Why are you lying to your readers?

“You and your pals lie. You claim we’re basically being bankrolled by a single donor. It’s just demonstrably false. Won’t stop you though,” Carusone wrote after Lord asked him if he gave back the Soros donation. “Crickets here, huh? Predictable. And you’ll go on to keep parroting this lie too, I bet. Because hey. Why not. Nothing matters apparently.”

On August 10, Lord wrote a follow-up column about Carusone’s response. After Lord tweeted a link to the column, Carusone pointed out that the original headline misspelled his name.

“Your headline has a mistake in it. Why do you expect anyone to take you seriously when you don’t take yourself seriously,” Carusone tweeted at Lord.

When someone said to Lord after that tweet, “this ain’t gonna help your career,” Lord replied, “Opposing Nazis and Fascists? Gee.”

Lord continued to defend the tweet in several tweets. “Nazis, Fascists, mass murder and stamping out free speech are decidedly not funny. Media Matters Fascists are in to one of them,” he wrote. In another tweet he said, “So opposing a Fascist/Nazi-style attempt to stop free speech is itself Nazi/Fascist? Ahhh Orwell.”

He claimed his “Sieg Heil” tweet was meant to “mock Nazis and fascists.”

Lord was asked why he hadn’t deleted the tweet, and he responded, “Why would I delete something that mocks the Fascists at Media Matters Fascists? Why would you tweet support tying Fascism?” 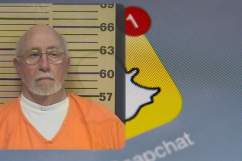