West Virginia Governor Jim Justice, who is expected to announce a switch from the Democratic Party to the GOP at a rally with President Donald Trump, is married to Cathy Leigh Comer Justice. The couple have been married for over 40 years and are parents to son Jay and daughter Jill.

Before the rally, Trump teased a “very big announcement,” which is expected to be his switch to the Republican party, the New York Times reports. The 66-year-old Justice was elected in November, even though Trump beat Hillary Clinton by 42 points in West Virginia.

Justice is the only billionaire living in West Virginia, as Forbes estimates that his net worth is $1.59 billion. He inherited his coal business from his father, and also runs The Greenbrier, a luxury resort in White Sulpher Springs.

Here’s what you need to know about Justice’s wife Cathy.

1. The Justices Met in High School & Married After College

Cathy Leigh Comer Justice is the only child of Thomas and Virginia Comer. According to her government bio, she was born in Beckley, West Virginia and grew up in prosperity.

Cathy met her future husband at Woodrow Wilson High School and were high school sweethearts. They married after she earned a Secondary Education degree from Marshall University. Justice also attended Marshall, earning a Master in Business Administration. Justice first attended the University of Tennessee, but transferred to Marshall to be closer to Cathy. 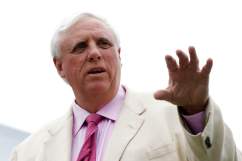 2. The Couple Live in the Same Lewisburg Home They’ve Had Since 2001

Justice might be a billionaire but before he won in November, the family has lived in the same Lewisburg home since 2001. The city is south of the state’s capital, Charleston. The couple live with their Boston terriers Molly Belle and Lucy.

Cathy told WSAZ that their home has three landline phones and no answering machines.

“We get a lot of calls, you know, and Jim’s idea about this is if we had an answering machine … that it would drive me crazy if I couldn’t call someone back and return their call. So I am just going to if we aren’t at home and they want to call back, they will until they get us and they do,” Cathy told WSAZ. “We just want things to happen for everyone, we want everybody to do well.”

In that same interview, Cathy said the family’s Baptist faith is important to them. She told WSAZ that her husband tries to read a chapter of the Bible every night. 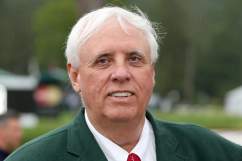 Jim Justice’s Net Worth: 5 Fast Facts You Need to Know

Cathy’s National Governors Association bio notes that she worked as president of Comer Electric, Inc., a business her family started, after her father died. She was also on the First National Back board of directors in Ronceverte for five years. She has also led a local reading program and worked as a substitute teacher in Raleigh County schools.

Her official bio also notes that she loves riding horses. She had a pony named Star while growing up and rode horses competitively. She won the 1976 West Virginia Quarter Horse Queen title. Her family still runs a thoroughbred racing operation, which she remains involved in.

4. Their Son Jay Became CEO of Southern Coal Corporation After Justice Was Elected

Cathy and Justice’s eldest child is James “Jay” C. Justice III. He is a graduate of Virginia Tech, earning a bachelor’s degree in 2003. Today, he runs his father’s coal business, the Southern Coal Corporation. He was previously executive vice president until his father was elected Governor.

In November 2016, Justice Corp. announced it was re-opening four mines, which were opened by February 2017. In an interview with the Herald Dispatch in February, Jay explained why he thought the coal industry in West Virginia took a hit.

“There are several factors that led to the decline. One factor being all West Virginia economic pullback in growth primarily in developing nations such as China, India and Brazil, coupled with a substantial economic downturn in Europe as well as the United States. These economic conditions primarily affected the metallurgical coal and steel related businesses. The other two factors that very significantly have hurt the coal industry is the explosion of very, very cheap natural gas production which competes and has taken a tremendous market share away from coal in the power generation Spector and last the thing that has hampered the industry is the tremendous new regulations that has been put on the producers of coal as well as the consumers of coal under the past administration.”

Jay also stood by the coal industry, noting that it was what “built this country.”

“I am very hopeful that with the changes that are underway from both our state as well as our nation that the coal industry will become better respected and better appreciated as well as all the people that work in the industry in what they do and what they have done,” Jay told the Herald Dispatch.

5. Her Daughter, Dr. Jill Justice, Is President of the Greenbrier

While Justice handed the keys to the coal and mining operation to their son, he made their daughter president of the historic Greenbrier resort in September 2016. Justice has owned the resort since 2009.

Dr. Jill Justice earned her bachelor’s degree at Marshall University and became of Doctor of Osteopathy in 2012 after studying at the Edward Via College of Osteopathic Medicine. She was a physician at Greenbrier Care and also ran a boutique cupcake shop in Blacksburg, Virginia. Justice and her husband, attorney Adam Long, were the first couple married at the new Greenbrier Chapel, which opened in September 2015.

“I’m so proud of Jill and all she’s accomplished,” Justice said in a statement last year. “I have watched Jill all the way. She’s smart. She loves Greenbrier County, and she loves The Greenbrier. Jill played a big role in getting The Greenbrier reopened after the devastating floods in June. I have real confidence in Jill, and I’m as excited as I can possibly be.