President Donald Trump raised some eyebrows in his harsh criticism of the media and “both sides” of the political spectrum following violence spurred by white supremacists in Charlottesville, Virginia over the weekend.

One day after delivering a scripted address to the nation from the White House condemning hate groups responsible for the intense violence over the weekend, Trump spoke off the cuff at Trump Tower and fielded questions from the media. He was there touting the signing of an infrastructure measure, but the questions almost all centered around his condemnation of hate groups and the issue of white supremacy in America.

Trump seemed very combative in his responses to some of the questions. Essentially, he walked back Monday’s statement in which he condemned white nationalists, the Ku Klux Klan and Neo-Nazis. Many saw those remarks as a step in the right direction after he made some controversial comments Saturday, saying that “both sides” were to blame for the violence and chaos in Charlottesville. Trump also attacked what he described as the “alt-left” for playing a role in the violence.

“You had many people in that group other than neo-Nazis and white nationalists,” Trump said.

Many were left in awe at what just took place, but none had a reaction quite like the one Chief of Staff John Kelly had.

Kelly, standing off to the side of Trump, was looking on with other members of the administration. NBC News reporter Kristin Donnelly captured a photo of the general standing with his arms crossed on his chest, his head looking to the ground and a blank expression on his face.

See the image of Kelly looking disappointed below:

John Kelly during the President's Q and A at Trump Tower pic.twitter.com/vxR3hTUqe3

Kelly, who previously served in the administration as the secretary of the Department of Homeland Security, was hired to serve as Trump’s Chief of Staff after Reince Priebus was relieved of his duties in late July.

“Kelly’s hiring is expected to usher in potentially sweeping structural changes to the turbulent operation,” The Washington Post wrote.

The White House has publicly said that all people within the administration would report to Kelly. On his first day in the new position, Kelly fired communications director Anthony Scaramucci, who lasted in the role just 10 days. 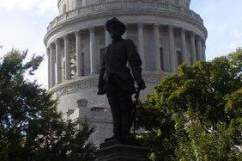