Kim Jong-un is notoriously private and abides by a strict set of guidelines set forth by his father, which Jong-un only made more strict himself.

With Kim Jong-un threatening nuclear war, the world is becoming very interested in his family.

Here is what you need to know about Kim Ju-ae:

1. Kim Ju-ae Has Never Been Seen in Public

The daughter of North Korea’s dictator has never been seen or photographed. In fact, Kim Jong-un and his wife, Ri Sol-ju, have never even confirmed that they have a child together.

While people have long wondered if Kim Jong-un and his wife had any children, the couple has kept their family completely out of the public eye.

It is unclear how many children Kim Jong-un and Ri Sol-ju have. Their ages are also unknown. Kim Ju-ae is about 4 or 5 years old right now, which means that she could already be receiving an education. It is unclear, however, if she attends school, if she’s home-schooled, or if her parents are forgoing schooling altogether.

It’s no secret that former NBA star Dennis Rodman has become good friends with Kim Jong-un over the years. In fact, Rodman has flown to North Korea on more than one occasion to hang out with his good friend.

After one of his earlier trips, Rodman spilled the beans about Kim Jong-un’s daughter, revealing not only that he had one, but telling the world the baby’s name.

“The Marshal Kim and I had a relaxing time by the sea with his family. We shared many meals and drinks where we discussed our plans to play a historic friendship basketball game between North Korea and the US as well as ways to develop their basketball team. I held their baby Ju-ae and spoke with Ms Ri as well. He’s a good dad and has a beautiful family. Kim told me, ‘I’ll see you in December,'” Rodman told The Guardian back in 2013. 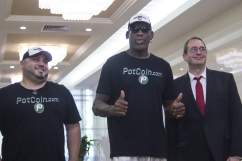 3. Kim Ju-ae Is Not an Heir to Her Father’s Throne

The nature of North Korea’s regime isn’t completely clear, but Kim Jong-un would need a son to be the rightful heir to his throne, in the event of his death.

Although some believe that women have equal rights in North Korea, a woman would not be permitted to rule the country, which means that Kim Ju-ae wouldn’t carry on her father’s duties.

“The harsh reality is that every day North Korean women face severe gender discrimination at work and home, and sexual harassment and violence that the authorities do nothing to stop,” explained Phil Robertson, deputy Asia director at Human Rights Watch.

Rulers in North Korea have always been men. 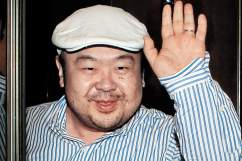 It is possible that Kim Ju-ae isn’t an only child. In fact, some believe that the child may have two siblings.

In 2014, photos of Ri Sol-ju wearing a “maternity dress” surfaced, but it was never confirmed whether or not she was pregnant at that time. If she was, it’s possible that the couple has three children: Kim Ju-ae would have been born in 2012 or 2013, another child in 2014, and a third the following year.

5. There Are Rumors That Kim Jong-un Has a Son

People assumed that Ri Sol-ju was pregnant again when she disappeared from the world for over 7 months back in 2015. Sources have said that Kim Jong-un has been “desperate” to have a son — and some believe that he already may have one.

While a pregnancy was speculated upon at the time, others thought that there may have been some marital troubles between Ri Sol-ju and Kim Jong-un, There were also rumors that Ri Sol-ju had some bad blood with Kim Jong-un’s younger sister, Kim Yo-jong.

“Ri showed up at public events every two months last year but has not appeared in public for over seven months this year. That’s quite extraordinary. This is certainly something of a surprise as Mr. Kim himself has been frequently pictured in the North Korean media. There are several possible reasons, including that she is pregnant or that there is some sort of problem between the two of them,” a source told Express UK.

According to the Daily Mail, Ri Sol-ju made an appearance at an air combat training competition in December 2016 with her husband; she hadn’t been seen for several months prior.

Overall, Ri Sol-ju’s public appearances have been minimal since Kim Jong-un first introduced her as his wife back in 2012.

Loading more stories
wpDiscuz
1
0
Would love your thoughts, please comment.x
()
x
| Reply
Kim Ju-ae is the only known child of Kim Jong-un. It has long been speculated that he has two children. The North Korean ruler has never introduced his kids.