Summit County Sheriff/Facebook Laura Lynn Cross pictured in her mugshot and with the alleged victim.

A former Ohio teacher is accused of grooming her student and then becoming pregnant with his child in 2015, during a “sexual relationship” that lasted several years, authorities say.

Cross was the boy’s teacher in 2012, when he was a 15-year-old freshman at Buchtel High School, the news station reports. She later convinced his mother to let her adopt him, and the boy moved into Cross’ home in August 2013. She quit her job as a teacher in January 2015, a month after she gave birth to the boy’s child, according to WEWS.

1. Cross Had the Boy’s Child in 2015, but It Was Kept a Secret Until Someone Told the Boy’s Father

Laura Lynn Cross gave birth to her former student’s child in December 2015, but the pregnancy and the child were kept a secret until someone tipped off the boy’s father this year, asking him if he knew he was a grandfather, WEWS-TV reports.

The boy’s father, who is not being named to protect the minors involved in the case, told the news station that his son moved into Cross’ home in August 2013. He said Cross convinced the student’s mother that she could “mentor” him. Cross was then given “partial parental custody” by the courts to allow the boy to move into her Tallmadge home, the news station reports.

Cross’ now-deleted Facebook page was filled with photos of her with the boy, including at his football games and before a school dance. Cross was married and the mother of three sons and a daughter at the time the boy moved into her home.

2. Two Police Departments Investigated the Relationship Between Cross & the Alleged Victim, but Decided There Wasn’t Enough Evidence for Charges

Laura Cross worked at Buchtel High School in Akron as an English teacher from 2008 until she resigned from her teaching position in January 2015, according to WEWS-TV. Tallmadge Police first began investigating the “relationship” between Cross and the student in 2012, when he was a freshman at the high school, but no charges were filed at the time, the news station reports.

A police complaint was also filed in Summit County in June 2015 by the boy’s mother accusing Cross of sexually assaulting her son, WEWS reports. The mother gave police suspicious text messages, including one that read, “You couldn’t love me enough…to hold me, love me, comfort me.” But the mother told police she did not remove her son from Cross’ home because she “didn’t want her son to hate her,” according to the police report.

Tallmadge Police Chief Ron Williams told the news station they investigated in 2015 and concluded “there was not enough evidence to bring charges.”

An Akron School System spokesperson told the news station that it was not aware of the charges against Cross until WEWS contacted them. The district said it is now conducting its “own internal investigation going back to 2012 to determine what exactly happened and when it happened. 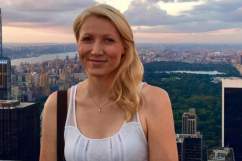 3. The Boy’s Father Says ‘to Get Aroused by a Child Basically Means You Have to Be a Sick Individual’

The boy’s father told WEWS-TV that he was the one who first raised concerns about the “relationship” between Cross and his son in 2012.

“First of all, she’s a schoolteacher,” the teen’s father told the news station. “To get aroused by a child basically you have to be a sick individual.”

The alleged victim’s father told the news station he thinks his son was let down by those who were supposed to protect him. “It was a straight failure from the system,” the teen’s father told WEWS. “From the school and definitely from the police.” 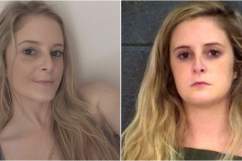 4. Cross, Who Has 4 Other Children, Has Been in Legal Trouble Several Times Since 2015, Including Felony Arrests for Theft & Drugs

Laure Cross, whose maiden name is Laura Hajjar, has four other children, sons ages 20, 15 and 10, and a teen daughter, according to court records.She was married as of October 2016, but it is not clear if she is still married. Authorities have not said who currently has custody of Cross’ four children.

Cross has been arrested multiple times since 2015 on felony charges in the time since she gave birth to her child and resigned from her position as a teacher, according to online court records.

She was first arrested by the Summit County Sheriff’s Office in November 2015 and charged with unauthorized use of a vehicle, a fifth-degree felony. According to Barberton Municipal Court records viewed by Heavy, Cross was accused of taking a 2015 Dodge Charger without the consent of Avis Rental Corporation for more than 48 hours. She was indicted on the charge in January 2016, and the case was transferred to Summit County Court. She was accepted into an intervention program in lieu of a conviction in October 2016, and the case is still pending until that program is completed.

Cross was then arrested in May 2016 by the Brimfield Police Department, according to Portage County, Ohio, court records. She was charged with theft, a first-degree misdemeanor. She pleaded guilty to a lesser charge, attempted theft, a second-degree misdemeanor, and was sentenced to a suspended 90-day jail sentence and fines. According to court records, Cross was accused of stealing from a Kohl’s store. Records show that she has not paid fines and restitution connected to the case and her car registration was suspended in June 2017. A judge set a status hearing for August 31. She appears to have had financial issues over the past few years. She wrote to the clerk’s office in 2016 asking for a court-appointed attorney, saying, “I am not working and haven’t for quite a while and don’t have the funds available to pay for one.”

She was also indicted in Summit County in May 2017 on a charge of aggravated possession of drugs, a fifth-degree felony. That case is still pending. According to court records in the unauthorized use of a vehicle case, Cross has had a drug problem. “The offender’s drug dependence, or danger of drug dependence, was a factor leading to the criminal activity which she is charged,” prosecutors wrote in court documents obtained by Heavy. She was accepted into a drug treatment facility in October 2016, but it is not clear if she completed that program.

It is not clear if Cross has an attorney. She could not be reached for comment. It is also not known when her next court appearance is scheduled for.

Read More
5 Fast Facts, Breaking News, Crime, Ohio
Follow Heavy ↓
Laura Lynn Cross, 36, a former teacher at Buchtel High School in Ohio, is accused of adopting, grooming and then getting pregant and having a baby with a student.