Lukasz Herba, a Polish-born British man, is accused of kidnapping and drugging a British model in Italy and then trying to sell her on the Internet for Bitcoin, according to a story she gave Italian police.

The model has now been identified as Chloe Ayling, 20.

Italian police said the suspect may be part of a crime syndicate known as “The Black Death.” Italian police have released a series of chilling crime scene photos in the bizarre case. Herba lived alone in an apartment in Birmingham, England, The Sun reports.

The model claimed she had flown to Milan from Paris thinking she was going on a photo shoot. However, new questions have arisen as police further probe the story, revolving around everything from a shoe shopping trip to contradictions in the model’s account. Daily Mail reports that Italian police are investigating whether the model collaborated with the suspect, who tried to sell the story to a tabloid during the purported kidnapping.

La Repubblica, an Italian newspaper, reported “That the kidnapping was real or that she was doped with ketamine is not put into question by the investigators. But it is also tremendously true that many details do not add up.’ Other Italian media have questioned parts of her story.”

1. The Model Was Put Up For Auction On the ‘Dark Web,’ Claims Say

Italian police initially said that Herba tried to auction the model off on the “dark web” after her abduction.

The model was “put up for auction for a huge amount of money on the dark web,” according to UK Mirror. The British news site says the asking price was €300,000 Bitcoin.

Authorities now say that Ayling’s “captives fed the stunner talking points about the group to give the media upon her release,” The New York Daily News reports.

“The letter, written in English, laid out a series of demands made of Ayling upon her release. The note also suggested that despite the snatch-and-drug caper, the kidnapping was intended to be used as a publicity event for the group,” Daily News reports.

Chloe’s Twitter page includes topless photos and defines her as an international model. You can learn more about her here: 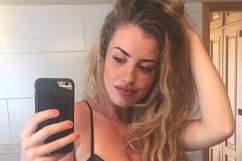 2. The Drug Ketamine Was Injected Into the Model’s Arm, She Said

According to The Mirror, the drug Ketamine was injected into her arm to facilitate the abduction.

According to Daily Mail, the girlfriend of Herba has spoken to the media. She claimed that Herba told her “he ran an international firm making synthetic chicken feed, and turned up at her home driving a Mercedes and wearing a pinstripe suit. He also told her he owned land in Scotland, was a crack shot who owned a sniper rifle, and was involved in the gold trade.”

3. A Rumored Crime Syndicate Called the ‘Black Death’ May Be Selling Women Online

The home where the abduction allegedly occurred.

Italian media report that police say the kidnapping may be tied to a crime syndicate called “The Black Death.” However, it’s unclear whether the syndicate really exists.

The Italian language newspaper Da Corriere Milao reports that “horrible, ingenious scammers or online scouts of sex, the ‘Black Death’ international criminal group might not really exist, despite an official Europol report accrediting that the ‘deep web’ puts at auction young girls kidnapped to be used sexually from buyers who offer more to kidnappers.”

However, reports the site, the kidnapping of the model in Milan lends credence to the possibility the syndicate is real, and police recovered a Black Death pamphlet as part of the investigation into the model’s abduction.

However, new questions have arisen in connection with the abduction. Daily Mail reports that the model “was taken on a shopping trip for shoes.”

According to Daily Mail, the model has claimed the abductor “did not sexually assault her but instead gave her gifts of chocolate and underwear.”

Milano Repubblica reported that the model burst into tears when Italian police asked her about the shoe shopping excursion.

Daily Mail reported that contradictions have been highlighted in Italian media; for example, a claim that “the kidnappers make ‘an injection into the right forearm’, even though she is wearing a ‘long-sleeved, pink, leather jacket.'”

4. The Model Said She Was Lured With a Fictional Photo Shoot

A car allegedly involved in the abduction of the model.

The abductors are claimed to have lured the model with a fake story about a photo shoot and then took her to a farmhouse near Turin for a week, according to Da Corriere Milano.

The model from the British agency was drawn to a location near Central Station in Milan with the story. Then, she was shoved into a car trunk, “waking up handcuffed to the furniture of a room, photographed and offered to the web in a sale that would be opened on Sunday following with an auction base of 300 thousand euros in bitcoin electronic money,” the site reported of the claims.

According to UK Daily Mail, the kidnappers have a rule against kidnapping mothers and changed their mind when they learned the model has a child.

5. Herba Is Accused of Confessing to the Crime

A room inside the farmhouse where the model was allegedly kept.

According to UK Daily Mail, Herba is accused by Italian police of confessing to the crime.

The Polish-born man was named as the model’s captor by police, according to the British news site. He is also accused of having sex with the model, UK Daily Mail reports. He went by the name Daniel Zawada in a passport, police said.

Loading more stories
wpDiscuz
9
0
Would love your thoughts, please comment.x
()
x
| Reply
Lukasz Herba is accused of kidnapping a British model in Italy and trying to sell her on the Internet for a crime syndicate called the Black Death.