Shkreli, 34, was acquitted on the other five counts related to hedge funds that he ran to a drug company he created, Retrophin. The decision was announced during the afternoon inside the federal Brooklyn courtroom.

Watch a live stream of Shkreli reacting to the verdict in the video at the top of the page.

During the live stream, Shkreli welcomed a reporter from the New York Daily News up to his apartment, where he promised to berate her to the audience. She sat down on a chair in his apartment and proceeded to interview him about his thoughts on the case and got animated at several points.

On the fifth day of deliberations, the jury finally announced its decision, and it was one Shkreli said on his live stream that he was “happy with.”

Prosecutors in the trial had claimed that Shkreli defrauded millions of dollars from investors in his two hedge funds. He repaid them with stock and cash that he took from Retrophin.

Shkreli faced a maximum prison sentence of 20 years. But because he doesn’t have a criminal record, it figures to be a far-less punishment in a minimum-security prison. A sentencing date hasn’t been set yet.

“I think we are delighted in many ways,” Shkreli said after the verdict. “I’m delighted the jurty did its job … maybe they found one of two broomsticks, but at the end of the day we were acquitted of the most important charges in this case.”

On his YouTube stream, Shkreli vowed to appeal the decision and said he thought the eighth charge will likely be dropped eventually. He loudly maintained his innocence since he was arrested on the charges. 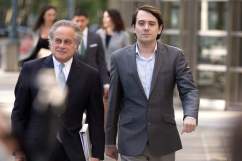 Read More
Breaking News, Crime
Follow Heavy ↓
"Pharama bro" Martin Shkreli was found guilty on 3 of 8 charges in court, including securities fraud. He took to YouTube to livestream his thoughts after.