On Thursday afternoon, a 20-year-old woman who was convicted of involuntary manslaughter for urging her boyfriend to take his own life via text message in 2014, received a sentence of 15 months in prison.

In sentencing Michelle Carter at Bristol Juvenile Court, Judge Lawrence Moniz cited the Massachusetts youthful offender statute, but said, “I have not found that Miss Carter’s age or level of maturity or even her mental illness have any significant impact on her actions.” Carter’s full sentence is 2.5 years in prison, of which she must serve 15 months, with probation time. Moniz issued a stay, allowing that Carter not be incarcerated immediately.

Carter’s attorney, Joseph Cataldo, had requested 5 years of supervised probation with mental health counseling, while prosecutors argued for 7 to 12 years in prison. In his closing argument, Cataldo cited Carter’s mental health issues with bulimia, anorexia and depression as circumstances that led to her tragic relationship with Conrad Roy III.

Eighteen-year-old Roy died by suicide on July 12, 2014 in Fairhaven, Massachusetts. His body was found inside his truck, located in a Kmart parking lot. The cause of death was carbon monoxide inhalation. He used a gasoline powered water pump to pump the deadly gases into his car.

As police delved into the case, they found over a thousand text messages that played a pivotal role in Carter’s trial earlier this summer. In the exchanges between a then-17-year-old Carter and 18-year-old Roy, she repeatedly taunted Roy and urged him to kill himself.

“I thought you really wanted to die but apparently you don’t, I feel played and just stupid.”

“You’re gonna have to prove me wrong because I just don’t think you really want this. You just keeps [sic] pushing it off to another night and say you’ll do it but you never do.”

And on the night of Roy’ death, when he faltered from his planned suicide, Carter urged him to get back in his car filled with poisonous fumes.

She spent 46 minutes on the phone with Roy, and was the last person to speak with him before his death.

In a text message to her friend Samantha Boardman, Carter later claimed responsibility:

“Sam, [Roy’s] death is my fault like honestly I could have stopped him I was on the phone with him and he got out of the [truck] because it was working and he got scared and I f—— told him to get back in Sam because I knew he would do it all over again the next day and I couldn’t have him live the way he was living anymore I couldn’t do it I wouldn’t let him.”

During the trial, attorneys argued over whether Carter pushed him to take his own life or whether he would have done it on his own. When Roy was 17, he overdosed on acetaminophen.

“He told me, ‘Mom, I’ll never do that again.’ And he was sorry,” Lynn Roy, Roy’s mother, said in an interview with Erin Moriarty on 48 Hours.

In the wake of Carter’s conviction, Roy’s mother told Moriarty, “I don’t believe she has a conscience. She knew exactly what she was doing, and what she said.”

Carter turned herself in after police issued an indictment in February of 2015. In a statement they issued to the Boston Herald in March of 2015, Carter’s parents, Gail and David Carter, said they believe in their daughter’s innocence:

“Our hearts have and remain broken for the Roy family. For everyone that does not know our daughter, she is not the villain the media is portraying her to be. She is a quiet, kind, and sympathetic young girl. She tried immensely to help Mr. Roy in his battle with depression. We know that once all of the facts are released, our daughter will be found innocent.” 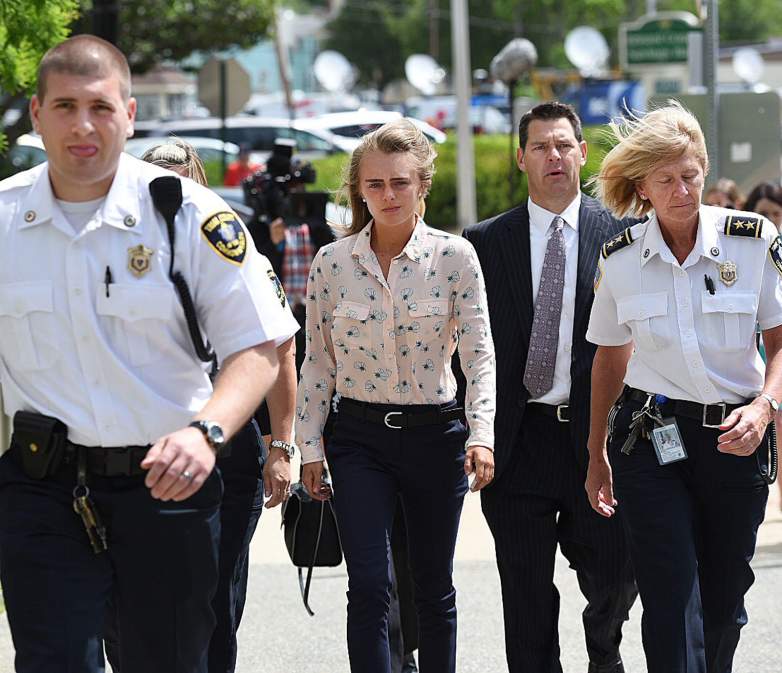 After her June trial verdict, Carter’s father wrote a letter to Judge Moniz, asking for probation and counseling as his daughter’s sentencing.

“She will forever live with what she has done and I know will be a better person because of it,” David Carter wrote in the letter obtained by the Boston Herald. “I ask of you to invoke leniency in your decision-making process for my loving child Michelle.”

Roy’s younger sister, Camden Roy, spoke at Carter’s sentencing. “Not a day goes by without him being my first thought waking up and my last thought going to bed,” she said through tears. “I’ll never get over this pain I’ll feel every day.”

Conrad Roy Jr., Roy’s father, also spoke, describing his pride at watching his son, whom he called Coco, driving a tugboat in July of 2014, just days before his death. “Michelle Carter exploited my son’s weaknesses and used him as a pawn in her own well being,” Roy said.

According to the 48 Hours segment, the teens met in Florida while vacationing in 2012. Though they lived in Massachusetts towns nearly an hour apart, they continued the relationship, bonding over their shared history of issues: Carter had been struggling with an eating disorder, while Roy had been dealing with anxiety and depression. Both teens had taken antidepressant medication.

In her high school yearbook, Carter was voted “class clown,” and “most likely to brighten your day.”

Prior to Thursday’s sentencing, many legal experts had weighed in on the likelihood of Carter facing prison time versus probation.

Robert M Bloom, a Boston College law professor, told the Boston Globe he thought Moniz would lean toward probation time only for Carter, an opinion that many in the legal community thought likely.

“I think, given some of the issues with regard to her — to wit, no criminal record, psychological issues that probably contributed to all of this, and the fact that they might not want an appeal, because the judge may not be on the most solid of legal grounds — that she might get probation,” Bloom said.

In the wake of Carter’s sentencing, she will remain free while an appeal is pending.

Loading more stories
wpDiscuz
50
0
Would love your thoughts, please comment.x
()
x
| Reply
On Thursday afternoon, a 20-year-old woman, who was convicted of involuntary manslaughter in June for urging her boyfriend to take his own life via text message in 2014 received probation as her sentence.