President Donald Trump took in 18 holes of golf at Trump’s golf club in Bedminster, New Jersey, on Wednesday, along with Mike Fazio, the CEO of Prime Staffing.

Fazio took to Instagram to share a photo of himself with the President, who gave him a good run on the course. As you can see in the caption above, Fazio and Trump’s game was competitive until the very end.

Fazio founded Prime Staffing, which is an employment agency, in 2004, according to his LinkedIn page.

Fazio’s social media photo was met with mixed responses. Most who have seen the photo have been concerned that the President of the United States is golfing leisurely while things are firing up by way of threats made by North Korea. Trump has been vocal about the threats on social media, but was all smiles on the course today, regardless of any chatter about a potential nuclear war.

In regard to Trump playing golf with Fazio, this isn’t the first time that the two met on the golf course. Last July, Fazio took to Facebook to share photos of his day out on the green with the “next President of the United States.” Fazio and Trump seem to get along swimmingly and they both enjoy a good round of golf.

Check out Fazio’s photos from last year below. 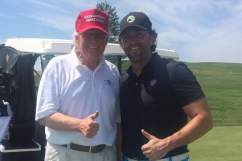 Loading more stories
wpDiscuz
0
0
Would love your thoughts, please comment.x
()
x
| Reply
Mike Fazio posted a photo of himself after golfing with President Trump in Bedminister, New Jersey, on Wednesday.