The above photo was posted on Snapchat by Nathaniel Jouett, believed to be the suspect in the Clovis-Carver Library shooting. Jouett, 16, posted the ominous picture, which showed him in what appears to be a public restroom, at 4:10 p.m. The photo seems to focus on Jouett’s black backpack, the contents of which are unknown. It is also unknown if Jouett used the “time” filter to signify anything in particular.

According to the Associated Press, two people were killed and four others were injured when a gunman opened fire at the library just after 4 p.m. on Monday. An individual, believed to be Jouett, was taken into custody by Clovis police shortly after the shooting was first reported.

According to a press conference held at City Hall in Clovis, the two deceased victims are female. They have been identified as Wanda Walters and Krissie Carter. Of the four injured, 2 are male and 2 are female. Although police have not revealed the suspect’s name, they did confirm that there was only one person arrested in connection with today’s deadly shooting. The suspect was taken into custody without incident — he “gave up immediately,” according to Chief Ford of the Clovis Police Department.

Following the reports of the shooting, The Eastern New Mexico News uploaded the following photos to Facebook. It wasn’t immediately clear if this was the suspect in the shooting. People on Facebook began commenting on the photo and at least one Facebook user claimed that the male in cuffs was Nathaniel “Nathan” Jouett.

As you can see in the above photo, the suspect was wearing the same sneakers while being taken to a nearby police car as Jouett was in the Snapchat photo. Jouett also has on the same sneakers in a few of his Facebook photos.

The other photos on his Snapchat from last night were also a bit strange. He had a couple of videos with his girlfriend, a picture of their names written on what appeared to be public property, and a weird picture of someone’s bloodshot eyes with the timestamp 12:16 a.m. 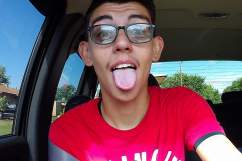 Loading more stories
wpDiscuz
0
0
Would love your thoughts, please comment.x
()
x
| Reply
Nathaniel Jouett has been identified as the suspect in the Clovis library shooting.