The city of Tampa, Florida, was privy to a partial solar eclipse on August 21, 2017. Although Tampa was not in the “zone of totality” for what’s been called the Great American Solar Eclipse, many areas in the city were be able to see a good portion of the sun covered by the moon. The eclipse began at 1:17 p.m. and will end at 4:14 p.m, giving folks in Tampa a cool view for nearly three hours.

The 2023 annular eclipse will begin shortly before noon on October 14. Occlusion will start at approximately 11:50 a.m. Local time and will last approximately three hours and 12 minutes, ending around 3:02 p.m. Peak viewing in Tampa of the 2023 annular eclipse will be at 1:25 p.m. It will get continuously darker up until this time and then will get progressively lighter in the minutes that follow.

Another annular eclipse will be visible in Tampa in January 2028, followed by a partial eclipse in January 2029 and one in November 2031. Tampa will be treated to two annular eclipses in 2038, with the first taking place on January 5 and the second occurring on July 2. If you are in the Tampa, Florida, area for these upcoming events, you’ll want to keep your solar eclipse glasses on-hand. 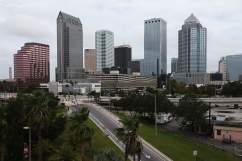 Read More
Florida, Solar Eclipse
There are a few more solar eclipses that will be visible in Tampa, Florida, in the coming decades.