An eerie video posted by a Japanese Twitter user, shows empty streets as an air raid siren and emergency announcement warns of a North Korea missile launch. You can watch the video above.

Another Twitter user, @JTNarisco, posted a video from Hokkaido, writing, “I woke up with a Siren and an announcement that North Korea launched a missile that would possibly hit cities within Hokkaido.”

A video posted to YouTube also recorded the siren:

Japanese authorities issued alerts warning residents to take cover about 6 a.m. local time Tuesday after the missile was launched from North Korea. It flew over Japan and broke into three pieces before landing in the Pacific Ocean off the Hokkaido coast, NHK, the Japanese state run news agency, reports.

Several people in Japan tweeted screenshots of the government alert that appeared on their phones early Tuesday morning.

“A missile was fired from North Korea. Please evacuate to a sturdy building or basement,” the “J-Alert” read.

Alarm from JP Gov. "A missile was fired from North Korea. Please evacuate to a sturdy building or basement." #northkorea #Japan pic.twitter.com/38NNCteqY2

North Korea projected a missile. And it has just passed over Japan. OMG. pic.twitter.com/phByLrWbcx

Announcements were also made through speakers in Hokkaido:

Emergency alert across northern Japan after a North Korean missile launch. Early reports say it overflew Hokkaido out to the Pacific. pic.twitter.com/TaVFWetfji

The missile launches come as U.S., South Korean and Japanese troops take part in military exercises that typically raise tensions in the region. 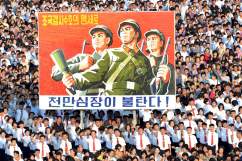 North Korea Statement Says It Will ‘Mercilessly Wipe Out the Provocateurs’