BREAKING: North Korea launches another missile, according to reports https://t.co/zX0miKcboc

North Korea fired an unidentified projectile on Monday which flew over Japan and landed into the sea, the Pentagon confirmed in a statement.

South Korea’s Joint Chiefs issued a statement following the launch saying the “unidentified projectile” was launched from an area near Sunan, Pyongyang and worked its way toward the east side of the Korean Peninsula, and officials from the country are currently holding an emergency meeting.

See the approximate path the missile took below:

Earlier this month, North Korea threatened to strike Guam, a U.S. territory located 2,131 miles away from North Korea. But about one week later, North Korea walked back its threat of striking the territory.

Other U.S. officials told CNN that Monday’s strike wasn’t a total surprise, as spy satellites observing North Korea took note that the country was prepping for a ballistic missile test, however concrete details are still filtering in.

Tensions have continued to mount in the area, and the most recent launch comes just three days after North Korea launched three separate missiles in response to the South Korean and U.S. military forces performing annual military exercises. The U.S. Pacific Command found in its inital assessment of the launches that the first and third missiles failed mid-flight after flying about 250 kilometers to the northeast.

In early August, President Donald Trump promised that North Korea would be “met with fire and fury like the world has never seen” if the nation continued its threats against America. He followed it up three days later by saying: “I hope that they are going to fully understand the gravity of what I said, and what I said is what I mean. So hopefully they’ll understand exactly what I said and the meaning of those words. Those words are very, very easy to understand.”

Pres. Trump on his recent comments on North Korea: “I hope that they are going to fully understand the gravity of what I said.” pic.twitter.com/aYbSitmmW8 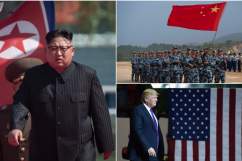