Getty his picture taken on August 9, 2017 and released by North Korea's official Korean Central News Agency (KCNA) on August 10, 2017 shows a rally in support of North Korea's stance against the US, on Kim Il-Sung square in Pyongyang.

North Korea has released a new statement vowing to “mercilessly wipe out the provocateurs” and hand the U.S. a “shameful defeat and final doom” in response to President Donald Trump, who on Thursday said his “fire and fury” warning to the North Koreans might not have been “tough enough.”

The latest statement, released by the Korean Central News Agency (KCNA), the official state-run media organization of North Korea, came as rhetoric between Trump and dictator Kim Jong Un has continued to escalate, CNN reports. It also comes a day after North Korea threatened to launch four missiles toward Guam, the U.S. territory closest to North Korea, and land them in the water off its coast. It also comes after the United Nations Security Council voted unanimously on new sanctions against North Korea and ahead of planned military exercises that will be carried out later this month by U.S. and South Korean troops, which typically escalate tensions on the peninsula, CNN reports.

According to CNN, the statement from KCNA said, “The U.S. would suffer a shameful defeat and final doom if it persists in extreme military adventure, sanctions and pressure.” The statement adds that officials have “vowed to mercilessly wipe out the provocateurs making desperate attempts to stifle socialist country.”

NEW: North Korea releases statement vowing to “mercilessly wipe out the provocateurs” and say the US would suffer “a shameful defeat" pic.twitter.com/pMgEOihMy9

.@jimsciutto reminds that we are in a “rhetorical escalation” with North Korea, not a military one https://t.co/B3SzEWUF0W

Trump on Thursday told North Korea if they don’t “get their act together or they are going to be in trouble like few nations ever have been in trouble in this world.” The president was asked about the reaction to his “fire and fury” comments from North Korea.

When asked by a reporter what would be tougher than “fire and fury,” the president answered, “Well, you’ll see, you’ll see.”

The president also said, “The people of our country are safe. Our allies are safe. And I will tell you this, North Korea better get their act together or they are going to be in trouble like few nations ever have been in trouble in this world.”

The comments came before a national security meeting on North Korea at Trump’s Bedminster golf club. After the meeting, Trump again addressed reporters.

“He has disrespected our country greatly,” Trump said of Kim Jong Un. “He has said things that are horrific. And with me he’s not getting away with it. He got away with it for a long time, between him and his family. Hes not getting away with it. This is a whole new ballgame. Hes not going to be saying those things and hes certainly not going to be doing those things. I read about were in Guam by Aug. 15. Lets see what he does with Guam. He does something in Guam, it will be an event the likes of which nobody’s seen before, what will happen in North Korea.”

Trump made the “fire and fury” comments on Tuesday, after reports that North Korea had possibly produced a miniaturized nuclear warhead that can fit inside its missiles.

“North Korea best not make anymore threats to the United States. They will be met be met by fire and fury, like the world has never seen,” Trump said, sitting with his arms crossed and speaking to reporters. “He has been very threatening, beyond a normal statement. And as I said, they will be met by fire, fury and frankly power the likes of which this world has never seen before. Thank you.”

On Wednesday, North Korea responded by lashing back at Trump in a military statement and revealing its plans to launch missiles that would strike near the coast of Guam.

The North Korean statement said “sound dialogue” is not possible with Trump because he is “bereft of reason and only absolute force can work on him.” The statement also called Trump’s “fire and fury” comments a “load of nonsense.” Here is the full Wednesday statement:

As already clarified, the Strategic Force of the KPA is seriously examining the plan for an enveloping strike at Guam through simultaneous fire of four Hwasong-12 intermediate-range strategic ballistic rockets in order to interdict the enemy forces on the major military bases on Guam and to Signal a crucial warning to the US

On Tuesday, the KPA Strategic Force is a statement of its spokesman fully warned against the US on its all-round sanctions on the DPRK and moves to maximize military threats to it. But the US president at a (golf) link again let out a load of nonsense about “fire and fury,” failing to grasp the on-going grave situation. This is extremely difficult to obtain.

It seems that he has not yet understood the statement.

Sound dialogue is not possible with such a bereft of reason and only absolute force can work on him. This is the judgment made by the KPA Strategic Force.

The military action of the KPA will take about an effective remedy for restraining the frantic moves of the US in the southern part of the peninsula and its vicinity.

The Hwasong artillerymen of the KPA Strategic Force are replete with a strong determination to fully demonstrate once again the invincible might of the force, which has been developed into a nuclear force of the Workers’ Party of Korea and the world’s strongest strike service, through the Planned enveloping strike targeting the US imperialist bases of aggression.

The Strategic Force is also considering considering the opening of the historic enveloping fire at Guam, a practical action targeting the US bases of aggression.

This unprecedented step is to give you a strong confidence in certain victory and courage to the Korean people and help them witness the wretched plight of the US imperialists.

The Hwasong-12 rockets to be launched by the KPA will cross the sky above Shimane, Hiroshima and Koichi Prefectures of Japan. They will fly 3 356.7 km for 1 065 seconds and hit the waters 30 to 40 km away from Guam.

The KPA Strategic Force will finally complete the plan until mid August and report it to the commander-in-chief of the DPRK nuclear force and wait for his order.

We keep closely watching the speech and behavior of the US.

Trump has dismissed claims that the his administration is sending mixed messages about North Korea.

Trump was referring to Mattis’ statement in which he said:

The DPRK must choose to stop isolating itself and stand down its pursuit of nuclear weapons. The DPRK should cease any consideration of actions that would lead to the end of its regime and the destruction of its people.

President Trump was informed of the growing threat last December and on taking office his first orders to me emphasized the readiness of our ballistic missile defense and nuclear deterrent forces. While our State Department is making every effort to resolve this global threat through diplomatic means, it must be noted that the combined allied militaries now possess the most precise, rehearsed and robust defensive and offensive capabilities on Earth. The DPRK regime’s actions will continue to be grossly overmatched by ours and would lose any arms race or conflict it initiates.

Tillerson, meanwhile, told reporters, “What the president is doing is sending a strong message to North Korea in language that Kim Jong Un would understand, because he doesn’t seem to understand diplomatic language. I think the president just wanted to be clear to the North Korean regime that the U.S. has the unquestionable ability to defend itself, will defend itself and its allies, and I think it was important that he deliver that message to avoid any miscalculation on their part.”

Trump, during his remarks to reporters Thursday, was asked to offer assurance to the American people who are anxious about North Korea.

“The people of this country should be very comfortable,” Trump said. “And I will tell you this, if North Korea does anything in terms of even thinking about attack, of anybody that we love or that we represent or our allies or us, they can be very, very nervous, I’ll tell you what. And they should be very nervous. Because things will happen to them like they never thought possible. OK? He’s been pushing the world around for a long time. And I have great respect for what China and what Russia did and those 15, we got a 15 to nothing vote. I have great respect for China and Russia, what they did on sanctions. I believe that will have an effect. I don’t think it will have the kind of effect, even though I was the one, we were the ones who got it. And Nikki Haley did a great job. We all did a great job. But I have great respect for what they did. I have great respect for the 15 to nothing, but probably it will not be as effective as a lot of people think it can be, unfortunately.” 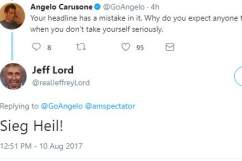 Loading more stories
wpDiscuz
4
0
Would love your thoughts, please comment.x
()
x
| Reply
North Korea has released a new statement vowing to "mercilessly wipe out the provocateurs" and hand the U.S. a "shameful defeat" in response to President Trump.