Getty Kim Jong-Un at a factory in a photo the North Korean media released in June 2017.

The dispute between North Korea and the U.S. has escalated this week, with President Donald Trump tweeting that the U.S. military is “locked and loaded” and the North Korean government saying the U.S. is bringing the Korean Peninsula on the “bring of nuclear war.” It’s estimated that North Korea has as much as 30 nuclear weapons, but a recent U.S. analysis estimated that the country has 60 weapons.

Since North Korea is an isolated country, there is no exact number of nuclear weapons available, but estimates from experts.

Estimates Range From 13 to 60 Nuclear Weapons

Siegfried Hecker, an expert on the country’s nuclear program who toured Pyongyang’s main nuclear facility in 2010, reported on 38North.org in September 2016 that North Korea had enough material to have 20 bombs by the end of 2016. He reported that the country has a stockpile of 32 to 54 kilograms of plutonium, which is enough to make six to eight bombs. As Hecker explained:

Whereas plutonium production can be estimated reasonably accurately because of telltale signals resulting from reactor operation, production of highly enriched uranium (HEU) remains highly uncertain. However, based on what I saw at the Yongbyon centrifuge facility during my last visit in November 2010, the expanded footprint of the facility since, and our probabilistic estimates of how much it could make in covert facilities, it is possible that the DPRK could add 150 kg of HEU (roughly 6 bombs’ worth) to a current stockpile of perhaps 300 to 400 kg.

An August 2017 report by the Institute for Science and International Security (ISIS) estimated that North Korea’s number of weapons could be higher, based on the material it has. ISIS estimates that it could have had 13 to 30 nuclear weapons by the end of last year. By 2020, the number could be even higher.

While North Korea has these weapons, the next problem for its military is launching them. The country has already conducted five tests of nuclear weapons, all underground. The tests took place in 2006, 2009, 2013, January 2016 and September 2016.

The BBC reports that the September test caused a 5.3 magnitude quake and had an explosive yield of between 10 and 30 kilotons. The BBC also points out that North Korea said the January 2016 test was of a hydrogen bomb, not an atomic bomb. Experts don’t believe that because it was as powerful as its tests of atomic bombs. (A hydrogen bomb should be more powerful than an atomic bomb, notes LiveScience.)

On August 8, The Washington Post reported that a confidential U.S. intelligence report concluded that North Korea was successful in creating a miniaturized nuclear warhead that fits inside one of their weapons. This U.S. analysis also estimated that North Korea has up to 60 weapons, although again, others estimate the number is lower.

The type of weapon North Korea threatened to fire in the direction of Guam is a Hwasong-12 missile. As The New York Times notes, this type of missile has a range of 3,000 miles, which puts Guam in range. It tested a Hwasong-14 missile in July and that could reach 6,500 miles. That puts Chicago and Denver in the U.S. in range and all of Europe.

The U.S. has an estimated 6,800 nuclear warheads, according to the Federation of American Scientists. Of those, 2,800 are retired and 4,000 are stockpiled, Time Magazine notes. The remaining 1,800 are deployed and ready to be used. It’s estimated that the range of the U.S. intercontinental ballistic missiles is 6,213 miles.

Russia has 7,000 nuclear warheads. France has the third-most with 300, while China has 270 warheads. The U.K. has an estimated 215 warheads. Those countries have all signed the Treaty on the Non-Proliferation of Nuclear Weapons. North Korea initially signed the treaty, but pulled out in 2003.

Three countries that didn’t sign the treaty have nuclear weapons. Israel is believed to have 80 nuclear warheads while Pakistan and India have 140 and 130, respectively. 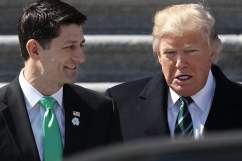 Can Congress Stop Trump From Starting a Nuclear War With North Korea?

Loading more stories
wpDiscuz
0
0
Would love your thoughts, please comment.x
()
x
| Reply
North Korea does have nuclear weapons, although its arsenal is tiny compared to the U.S.' Here's how many nuclear weapons they have.