Former President Barack Obama celebrated his first birthday out of the White House on Friday. And Obama, who turned 56-years old on August 4, is celebrating it alongside his family at Martha’s Vineyard.

According to Martha’s Vineyard Times, Barack, Michelle, Malia and Sasha are heading to Chilmark, Massachusetts to vacation and celebrate his birthday.

“They’re coming in this weekend,” Ann Crook, the general manager of the Martha’s Vineyard Airport told the publication. “I can’t get any more specific than that.”

The Obamas are regulars at Martha’s Vineyard, coming to the vacation spot seven of the past eight summers.

But Crook said welcoming the Obama family will have a different feel to it this time around. Air Force One won’t be landing nearby, Marine One won’t be flying them to the island and there won’t be any airspace restrictions.

One year ago, Obama hosted a birthday party at the White House alongside numerous musicians and celebrities such as Beyonce and Jay Z, so this year’s celebration figures to be a bit more tame.

Obama sure seems to be enjoying his time out of office and has certainly kept busy. He’s been working with the Obama Foundation, giving speeches on occasion, gone kitesurfing with Richard Branson and played golf in Hawaii.

On his birthday, numerous celebrities, athletes, politicians and more to wish the former president a “Happy Birthday.” One of the first to do so was his wife, former First Lady Michelle, who posted a touching tribute on Twitter. She posted two photos of the family celebrating his 43rd birthday to Twitter with the caption: “Another year older, but the same phenomenal guy I married nearly 25 years ago. Happy birthday, Barack Obama — we love you so much!”

Another year older, but the same phenomenal guy I married nearly 25 years ago. Happy birthday, @BarackObama — we love you so much! pic.twitter.com/3WrcGiKgz1

In addition to the tweet, Michelle encouraged people to show how they are “stepping up to be a better citizen” within their communities so far this year in an email to the Obama Foundation subscribers.

Maybe that means attending a town or city council meeting. Maybe it means contacting one of your elected officials and speaking out about an issue that matters to you. Maybe it means helping to clean up a local park, volunteering at a soup kitchen, or tutoring in an after-school program.

This work — these personal, local, daily acts of citizenship — is what the Obama Foundation is all about. This work is what my husband is all about.

Here are some other notable people who wished Obama a “Happy Birthday:”

Happy Birthday @BarackObama!! Yes we do love you! Thank you! Enjoy your day ? https://t.co/hnfrNZXC0D

Happy Birthday @BarackObama! Hope you get some balloons. I love a good balloon. #HBD44

Happy birthday to the flyest to ever do it??✊? #ObamaDay @barackobama pic.twitter.com/iIkyuyhRzw

Happy birthday, President Obama! Thank you for all you’ve done for our country. pic.twitter.com/HIk2iSJNkc 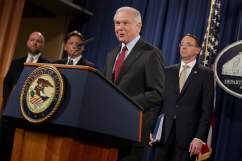 WATCH: Jeff Sessions Says DOJ Could Force Media to Give up Sources