Getty Mars is one of four planets that will be visible during the solar eclipse.

During the Great American Total Solar Eclipse on August 21, the moon will block the sun, meaning that other objects in the sky will be visible at a time when they normally aren’t. That includes four planets – Mercury, Venus, Mars and Jupiter. However, only two of these will be bright enough to see with the naked eye.

First off, remember that looking directly at the sun during the eclipse can cause permanent damage to your eyes. As Space.com notes, you can go blind because the sun is so intense that it can actually burn your eyes. You will need special eclipse glasses to look directly at it. However, pinhole projection is another option if you can’t get glasses.

NASA Jet Propulsion Laboratory/YouTubeA view of the sky during totality from NASA.

While looking at the sky during the eclipse (again, while wearing proper eye protection), you will see that the sun is in the Leo Constellation. Venus will be the brightest object in the sky, at 34 degrees to the west (right) of the sun in the south-southwest sky, notes Space.com.

Jupiter will be the next brightest object, but it won’t be visible everywhere in the U.S. Space.com notes that you won’t be able to see it if you live west of Idaho, since it’s below the east-southeast horizon. If you can see Jupiter, it will be around the Virgo constellation.

The other two planets that will be visible during the eclipse are Mars and Mercury. However, you’ll probably need a telescope to see them since they will be very close to the sun. Mars will only be eight degrees west of the sun. Space.com notes that Mercury will be 10 degrees east of the sun and will be very faint.

Venus will actually be visible long before the solar eclipse begins. EarthSky.org notes that the planet will be gradually become more visible 15 to 30 minutes before totality. Thirty seconds before totality, Mars will appear, looking like an orange “star,” along with Mercury. Jupiter will be the last planet visible.

Another very bright object that will be visible is the star Sirius. That’s the brightest star in the night sky. It’s visible southwest of the sun and is going to be as bright as Venus. The stars Arcturus and Capella will be visible to the east and northeast, respectively. Castor and Pollux will be visible just above Venus, notes National Geographic.

Only those who fall in the “path of totality” will experience the full total solar eclipse. The path runs right through the contiguous U.S., from Oregon to South Carolina. The length of totality depends on where you’ll be, but it will be between two and three minutes, according to NASA’s Eclipse 2017 site. For example, if you’re in Southern Illinois, the duration of totality will be 2 minutes, 40.2 seconds. On the South Carolina coast, the duration will be 2 minutes, 31.9 seconds.

Another cool fact about solar eclipses is that Earth isn’t the only planet that experiences them, or at least something similar to them. Astronomers told LiveScience that as long as other planets have moons that can cover the sun’s disc, they can also experience solar eclipses. Unfortunately, no one is on the other planets in our solar system to experience them.

The only planets without moons are Mercury and Venus, so they can’t have solar eclipses at all. And if you lived on Jupiter, Saturn, Uranus or Neptune, it would be impossible to see the solar eclipse. You can’t stand on those gas giants to see their eclipses. Mars has the “transit of Phobos,” when the small moon comes between Mars and the sun. Unlike a solar eclipse on earth, it only lasts about 30 seconds. 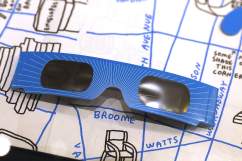 Loading more stories
wpDiscuz
0
0
Would love your thoughts, please comment.x
()
x
| Reply
Four planets will be visible during the 2017 solar eclipse. Find out which ones you can see and if other planets experience solar eclipses.