A woman named Summer Marie, claiming to be 3 months pregnant, allegedly made racist comments towards another woman before attacking her in a hotel lobby. The video was uploaded by YouTuber haydensi, but no other information was provided.

The video begins moments before the beating of Marie takes place.

“You hit me with one of your shoes, I’m gonna f**kinng shoot you in your f**king face,” Marie says to a seated woman removing her shoes.

“I’m taking my s**t off so that if she puts her hands on me I can defend myself,” the woman removing her shoes calmly tells someone off-camera, potentially the person filming.

Soon after, Marie attacks the woman, who responds by taking her down and repeatedly striking her in the head at least 10 times. While she strikes Marie, she screams what led up to the altercation, most notably mentioning Marie participating in racism.

Two black men rush to intercede in the beating and pull the women off each other.

After things have settled a bit, Marie, who began the altercation, mentions that she’s 3 months pregnant. “You will go to jail,” Marie warns the other woman.

“I don’t know why you were in my face like that then,” the woman says back to Marie.

The police force Marie to sit down, where she repeatedly tells the police that the other woman attacked her and that she’s 3 months pregnant. 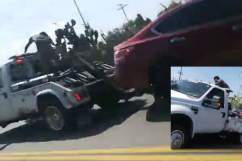 Read More
Youtube
Follow Heavy ↓
A woman named Summer Marie, claiming to be 3 months pregnant, allegedly made racist comments towards another woman before attacking her in a hotel lobby.