Getty LONDON, ENGLAND - FEBRUARY 02: Robert Hardy arrives for the 'Oldie Of The Year Awards' at Simpsons in the Strand on February 2, 2016 in London, England. (Photo by Ian Gavan/Getty Images)

Harry Potter actor, Robert Hardy, has died at age 91, according to BBC.

The British actor got his start in the entertainment industry in the 1950s in the film Torpedo Run. In 1959, he appeared opposite Laurence Olivier in Coriolanus at Stratford-upon-Avon.

Hardy led a long and accomplished career in theater, film, and television, that spanned over 70 years.

Read on to learn more about the actor.

1. He Played Cornelius Fudge in the ‘Harry Potter’ Films

In a 2009 interview with The Leaky Cauldron, Hardy spoke about his time on the show. “I had a ball fooling around with old friends like Maggie Smith… Thanks to those films I get the most extraordinary amount of fan mail from all over the world, even China.”

Hardy played a number of great stage roles in his life, including Henry V and Hamlet.

2. He Spent Time Studying Under C.S. Lewis and J.R.R. Tolkien

Actor Robert Hardy speaks outside the Churchill War Rooms Museum at a Battle of Britain anniversary celebration on August 20, 2010 in London, England.

In November 2011, Hardy spoke to BBC Radio 4’s Dessert Island Discs about his childhood and acting career. In the interview, he described the degree he obtained from Oxford as “shabby”. He also revealed that he studied under Chronicles of Narnia author C.S. Lewis and The Lord of the Rings author J.R.R. Tolkien.

3. He Was the Star of the TV Series ‘All Creatures Great and Small’

The accomplished actor became a household name for his work as Siegfried Farnon in the TV series All Creatures Great and Small which ran from 1978-1990.

Interestingly enough, Hardy did not think a television adaptation of All Creatures Great and Small would be successful. He believed the adaptation would “bore the times” and “annoy the country.” Laughing, Hardy told BBC in 2011, “I was wrong, thank goodness. Both time and country enjoyed it!”

Hardy’s most critically acclaimed role is considered to be the title character in Winston Churchill: The Wilderness Years. He acted in predominantly British projects until 1965, when he acted in The Spy Who Came in from the Cold, Mary Shelley’s Frankenstein, and Sense and Sensibility.

4. He Was Close Friends with Richard Burton

In 2011, Hardy paid tribute to his longtime friend, Richard Burton, who passed away in 1984. In his eulogy, he stated, “Richard’s life is famous, though only a fortunate few know of his wide generosity, his gentleness in the still centre of the fire and sometimes fury…. Now in a sense he is going back to Wales – which, however he travelled, he never really left – to a theatre for these students, that will bear his name, and which I fancy he will haunt.”

When Elizabeth Taylor passed away in March 2011, Robert Hardy was brought on Channel 4 News to discuss his relationship with her– through his good friend, Burton. Speaking of the first time they met, he said, “It was sometime in 1962– I think Richard brought her to London… the telephone rang and Richard’s voice said ‘Someone here wants to talk to you’, and then came Elizabeth Taylor. And then they came around.” Richard said he warned Burton and Taylor there was nothing but sausages and vodka in the house, but “Elizabeth liked them both.”

5. He Was Married Twice and Has Three Children

Robert Hardy attends the “Harry Potter And The Order Of The Phoenix” UK premiere held at the Odeon Leicester Square on July 3, 2007 in London.

Hardy was born in Cheltenham in 1926, and was the youngest child in his family. He studied at Rugby School and Magdalen College, and Oxford University for a brief stint before serving in the Royal Air Force.

Hardy was married to Sally Pearson (Gladys Cooper’s daughter) from 1961-1986, and Elizabeth Fox from 1952-1956. He has three children: Emma Hardy, Justine Hardy, and Paul Hardy. Hardy was a grandfather to four children, and in 2011, he told BBC, “I see as much of my family as I possibly can.”

In 1981, Hardy was awarded the CBE (Commander of the Order of the British Empire) in the Queen’s Birthday Honours List for his services to drama. 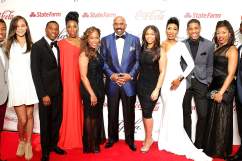