Part of the Rockport, Texas High School building has collapsed or been severely damaged from Hurricane Harvey’s powerful 130 mph winds. Contrary to some accounts on social media, the school is not “gone” or completely destroyed, according to local media reporters in Texas.

However, there were other devastating reports out of Rockport, and CBS Austin described the damage to the school as “massive.”

Here’s another look at the school:

This used to be the gymnasium at Rockport Fulton High School #hurricaneharvey #khou11 pic.twitter.com/vjUwswPmkF

At least 10 people were injured in various locations in Rockport as the hurricane made landfall, ABC News reported, and there were reports of other buildings damaged. Over 100 people were evacuated from a damaged Rockport Fairfield Inn, according to The Weather Channel. One local TV crew filmed video of that scene. It was not yet clear where the injured people were wounded or the seriousness of their injuries.

The conditions were too difficult for officials to fully assess the damage in the early morning hours of August 26; in fact, emergency rescue officials were sidelined as they waited for the winds to dissipate in strength. It was so bad that the mayor asked people to write their names and social security numbers on their arms and was driving around town in an armored truck to try to get a handle on the damage, KXAN-TV reported.

Rockport, Texas fire chief on not being able to respond during height of #Harvey: "Our hands are tied and it's killing all of us." pic.twitter.com/0mqCx5SRsW

The high school damage report was one of the first reports to go public, increasing fears for the small coastal community. Corpus Christi ABC affiliate reporter Briana Whitney reported on Twitter that officials had confirmed the partial collapse of the school. “EOC officials confirm large part of Rockport High School has collapsed,” she wrote at 11:10 p.m. on August 25. She also tweeted, “Yes school is still standing, but officials confirm part of it has caved in and collapsed. Not completely ‘gone.'”

Good news out of Rockport. I've confirmed the reports that the high school was "gone" are not true. A portion has caved in. #Harvey

More info on reports regarding the Rockport high school: A gym collapsed. I can't discern scale of damage from pictures I've seen #Harvey

Woolbright also noted on Twitter that there is a lot of fear and confusion in Rockport right now. It was too dangerous the evening of August 25 and early morning hours of August 26 for anyone to do a full assessment of the damage. The obvious priority: Staying safe as the 130 mph winds hammered the community.

We know there are reports of mass damage in Rockport and Aransas Pass from #HurricaneHarvey We're trying to confirm as soon as possible.

The local Corpus Christi newspaper heard the same thing about the high school from residents.

According to the Corpus Christi Caller-Times, “The Caller-Times is receiving the following report: Gusts above 130 mph are raging through Rockport, and there are reports from residents that the Rockport-Fulton High School has been destroyed. Sgt. Kyle Burns with the Texas Military Department said he did not have information about the developing situation in Rockport, but they are prepared to provide assistance as needed.”

This looks like part of an AC unit that used to be on the roof of Rockport Fulton High School #HurricaneHarvey #khou11 pic.twitter.com/3wRas6Sa5c

However, the newspaper later updated its report as more information was learned.

“Reports that the high school in Rockport is gone appear to have been inaccurate, according to the volunteer fire department in Rockport,” the newspaper reported, quoting Gillian Cox, the department’s public information officer as saying, “A part of the roof has caved in, but the reports that buildings have disappeared don’t appear to be accurate.” In fact, the newspaper reports that officials have received other reports of destroyed buildings only to discover them standing. Officials said they wouldn’t know the true extent of damage in Rockport until Saturday morning, the newspaper reported, adding, “There are eyewitness accounts, however, of severe damage to other structures around the seaside town.”

Some reports on social media said that people were inside the school and may have been injured, but that was not yet confirmed by authorities or the local news reporters and, at this time, it appears to be without evidence. In fact, Austin television reporter Jason Puckett wrote on Twitter that the high school was not the location of a hurricane shelter (people on social media had mistakenly said it was, leading to the unconfirmed injury accounts). Rather, Puckett reported, the shelter was at a local elementary school.

However, at least 10 people were injured in Rockport, Texas as Hurricane Harvey thrashed through the small coastal community, according to ABC News. It’s not clear where they were injured, though.

According to The Washington Post, “Multiple structures have been damaged or destroyed.” It was not yet clear which ones.

According to KSAT-TV, “at least two people are trapped in collapsed buildings in Rockport after Hurricane Harvey made landfall Friday night, Rockport City Manager Kevin Carruth told the ABC affiliate in Corpus Christi.”

#Harvey has weakened to a Category 3 with winds of 125 mph. The storm is 5 mi north of Rockport, TX moving NW at 6 mph. #FirstAlertSETX pic.twitter.com/QpSitYw8CP

The television station added, “Carruth said the roof of a senior center collapsed injuring several inside the building. Rescuers were able to take the injured to a local jail that is being used as a medical center during the storm.”

According to ABC13, “Rockport City Manager Kevin Carruth said by telephone that he had heard reports of a tree falling into a mobile home and roofs collapsing on houses.” The television station reported that there was also severe damage at the courthouse.

The Category 4 hurricane made landfall in Rockport, unleashing its wrath on the small community on the Texas coast, in the evening of August 25. CNN reported at 11:30 p.m. that Rockport was inside the eye of the hurricane at that time, and that more damage may ensue as it moves out of the eye.

The reports originated on social media and with residents and are being reported by some other Texas media as well.

Zach Covey, a KFOX-TV metereologist in El Paso, wrote on Twitter that a “chunk” of the school’s wall collapsed.

Several minutes later, he tweeted of more damage, “#Breaking: 128 people evacuated from Fairfield Inn and sent to shelter after hotel destroyed from #Harvey.”

BREAKING NEWS: Rockport's city manager tells me there's been a report of a collapse at the town's high school. #HurricaineHarvey –KHOU11

People expressed shock on social media. “Prayers for rockport TX. I just saw that the high school is gone,” one man wrote on Facebook, illustrating how quickly the news traveled (and, luckily, the school appears to not be completely gone). One woman disputed the account on social media, but it wasn’t clear where she was getting her information. “Further, per Rockport-Fulton Volunter Fire Department: High School has not collapsed. First responders are safe.”

The conflicting reports underscore the dangerous nature of the scene in Rockport – and the fear.

Reports that portions of a high school in Rockport, TX, where Hurricane Harvey made landfall, have collapsed, @Action10News says pic.twitter.com/qgVTJ31x13

Before the high school reports, the mayor told Fox News that the city was experiencing severe weather as bad as it looked on television and in citizen and stormchasing videos.

“It’s everything that you’re probably seeing. We’re right in the middle and have been since 7 p.m. Intense winds, strong rain. It’s gotten worse over the last hour,” Rockport Mayor Patrick Rios told Fox News, adding that Rockport is expected to see this magnitude of rain and wind for 24 hours.

The weather was also bad in Rockport by just before 5 p.m. on August 25, making for a long and frightening night.

4:45 pm. Really ripping hard now in Rockport. Impressive, given we're not in core yet. #HARVEY pic.twitter.com/SE06Y5WSHN

The hurricane made landfall as a Category 4 hurricane.

NHC_Atlantic: #Harvey made landfall at 10 PM CDT as a category 4 hurricane near Rockport, Texas, with max winds of… https://t.co/N9nOTocR15

The dangerous winds were captured by citizen videos.

The Rockport/Fulton area of Texas calls itself the “charm of the Texas coast.”

“Charm of the Texas Coast! Located along the Texas Tropical Trail, and a significant stop along the Great Texas Coastal Birding Trail, these twin communities are nestled among the wind-swept oaks of the Live Oak Peninsula,” its tourism website says. It’s 2016 population was just over 10,000 people.

The National Weather Service reported on August 25, “Hurricane Harvey officially made landfall just northeast of Corpus Christi on Friday night as a Category 4. Dangerous storm surge and extreme winds are impacting the Texas coast. Harvey will bring multiple days of heavy rainfall to a large part of Texas, increasing the likelihood of devastating inland flooding. Check your local forecast for updates and abide by instructions from local authorities.”

The storm’s wind speeds then dissipated to 125 mph, making it a category 3 storm.

You can read updated information about Hurricane Harvey from the National Weather Service here. 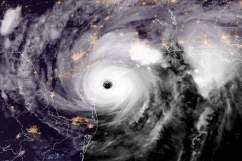 Read More
Breaking News, Hurricane, Texas
Follow Heavy ↓
There are reports that the Rockport, Texas High School building may have partially collapsed or been damaged due to Hurricane Harvey.