Former New York City Mayor Rudy Giuliani was rushed to the hospital for emergency surgery on his leg after taking a fall, the New York Post’s Page Six reported Tuesday.

In an exclusive interview from his hospital bed, Giuliani told Page Six’s Emily Smith that he’s in good spirits as he recovers from having emergency quadriceps tendon surgery.

Giuliani, 73, told the publication that he was a catcher on a baseball team growing up, and he suffered from “catchers knee” for years. He said he took a fall after his knee gave out while with friends at a barbecue in Long Island on Sunday.

“Doctors said it would deteriorate,” he told Smith of his knee. “Then my knee gave way when I was walking on Sunday.”

Giuliani credited his wife Judith with assisting him from the serious injury so it wouldn’t get worse.

“I tried to get up but Judith ordered me not to move,” he said. “If it hadn’t been for her, the injury would have been a lot worse. I now call her ‘Nurse Nancy.'”

Judith is a trained nurse, she told Page Six, adding that when she saw him fall in an “unnatural way,” she ensured he stay put until additional medical personnel could arrive.

“Rudy had to have surgery right away,” she said. “He will be in the hospital for a few more days, but he’s in great spirits. He keeps calling me ‘Nurse Nancy.’ He is the eternal optimist. He may have to use crutches for a while.”

Giuliani served as NYC mayor from January 1, 1994 until December 31, 2001. He’s best known for leading the city following the September 11, 2001 terrorist attacks. He was awarded honorary knighthood by Queen Elizabeth II in February 2002 for his job performance after the tragedy.

However, he was quick to downplay potential health risks that could arise from walking throughout Ground Zero and moved quickly to open the area.

“The air quality is safe and acceptable,” he told citizens and rescue workers.

But in the weeks that followed, a study performed by the U.S. Geological Survey found hundreds of asbestos in debris dust in buildings, and it was determined that the toxicity of some debis was on the same level as drain cleaner.

Giuliani is a noted survivor of prostate cancer. He was diagnosed with the diseased in 2000 after undergoing a routine screening. He subsequently underwent a prostate biopsy, which came back as positive. He took about two weeks to weigh his options and chose to be treated through “hormonal therapy, radioactive seed implants and external beam radiation,” VeryWell.com reported.

The treatment procedures have been successful and says he remains disease free. 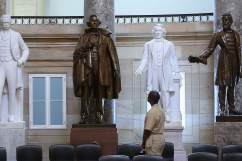 Over 1,500 Symbols of Confederacy Exist in the United States