Reports of an active shooter in Charleston, South Carolina, appeared on social media on Thursday afternoon. Police in the area have confirmed that they are dealing with an “active shooter situation.” The incident is currently fluid and police are working to locate the suspect and ensure everyone’s safety.

According to CNN, police have asked people to stay away from the downtown area, especially around King Street. There are several police officers on the scene with their guns drawn.

“Right now the streets are full of SWAT and police and people heavily armed. They are blocking off the whole block,” Sarah Cobb, owner of MOSA boutique told CNN.

“King btwn Calhoun & Morris blocked to motorist & pedestrian traffic active shooter in 400 block of King people to avoid the area.”

The photo below shows police outside of a restaurant called Virginia’s on King. Glenn Smith, editor of The Post and Courier, said that there is an armed man inside the restaurant and that he may have at least one hostage with him. He also heard that the man with the gun told people inside the restaurant that he is the “new king of Charleston.”

A couple of people who had been dining at Virginia’s on King spoke out about what happened. Peter Siegert, 73, and his son Peter Siegert IV, 45, described seeing “an older black man wearing an apron and dressed like a kitchen staff member,” according to The Post and Courier.

“He told everyone in the restaurant to get down and move to the back of the building. There were about 30 people dining at the time. They herded to the back where there were two side exit doors. They began filtering out, some crawling on all fours,” The Post and Courier reported, recapping what the patrons said.

Police worked diligently to secure the area and to blockade the streets around the restaurant.

#BREAKING: Here is the scene in Charleston after reports of an active shooter. (Photo by @mkwildeman) pic.twitter.com/a9Ks3UxdnU

Emergency vehicles are in the area and a police helicopter has been circling the block, according to Glenn Smith.

Charleston mayor John Tecklenberg arrived on the scene a short while ago. 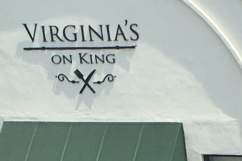