A partial solar eclipse rolled through Houston, Texas, on Monday, August 21. Although the state of Texas was fairly far from the path of totality, millions of people were able to see the event as the moon passed in front of the sun, blocking some of its light from the earth.

The partial eclipse in Houston began at 11:46 a.m. local time. Over the next 90 minutes or so, the moon gradually moved in front of the sun. The partial eclipse hit its peak at 1:16 p.m., before everything went back to normal at 2:45 p.m. Those with protective eclipse glasses were encouraged to go outside and look up at the sun, which was obstructed by the moon in the middle of the day.

The weather in Houston was partly cloudy for the event, but people were still able to view the eclipse just fine. After it was all said and done, some rain moved into the area.

If you missed today’s eclipse, Houston, Texas, and you want to see one soon, you might just be in luck. The Lone Star State is on the path of totality for the next big solar eclipse event, which will occur in seven years time. On April 8, 2024, many folks in Texas will be in complete darkness for a few minutes, landing right in the middle of the 100 percent totality range. Check out the map below to see the path of Monday’s eclipse and of the eclipse in 2024.

Below are some photos from today’s partial eclipse in Houston.

All I want today is #eclipse images and that's all you're getting. #gooutside #htx #houston #sciencerocks 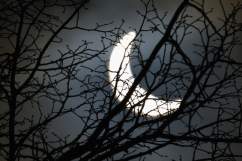