Getty The view of the 2015 partial solar eclipse from Germany.

While Americans are rushing to cities and towns within the path of totality for the Great American Solar Eclipse of 2017, Massachusetts residents will feel a little left out. The Bay State, along with the rest of New England, is far from the path of totality, but at least we will experience a partial solar eclipse. The partial solar eclipse will take place at around 2:46 p.m. ET in Boston.

When the solar eclipse reaches the east coast, the “path of totality” dips to the Southeast, with those along the South Carolina coast experiencing a total solar eclipse, according to NASA’s map. Although we’re over 900 miles from South Carolina, Boston will still see at least 63 percent of the sun covered by the moon. Those in Worcester and Springfield will experience at least a 65 percent partial solar eclipse.

While the sky will completely go dark for those in the path of totality, meaning they can see planets and stars in the middle of the day, that won’t be the case in Massachusetts. As Sky & Telescope Magazine’s Janine Myszka explained to WBUR, “Here in Boston, we’re not going to have quite nearly a dramatic effect. You might notice that shadows get a little bit sharper. But because we’re only in the 63 percent coverage area we won’t notice a ton.”

“We’re in the partial part of that shadow, it’s called the penumbra,” Myszka explained. “Here in Boston and Cambridge, we’ll only get blocked out part of the sun and we’re going to see a partial eclipse and it’s going to be really awesome.”

Still, it’s important to wear special solar eclipse glasses to watch even a partial solar eclipse. If you don’t have them, you can follow instructions to create a pinhole projector instead.

Clouds could get in the way of really enjoying the solar eclipse, but Massachusetts is expected to have clear skies. As Boston.com notes, there is high pressure over the Northeast, so it should be nice weather for Monday. According to Weather.com, it’s expected to reach a high of 86 degrees in Boston, with no rain in the forecast.

Scientists and science fans in Massachusetts will still have eclipse events. MIT is hosting a sold out viewing at the MIT Wallace Observatory. However, MIT will provide free eclipse glasses for anyone who goes to the Kresge Oval Monday afternoon. Sun-safe telescopes will also be set up.

The Boston Children’s Museum is also hosting a viewing party. The event will include model-making and drawing for children and eclipse glasses will be provided for them.

If you’d like to do something really unforgettable, Cohasset PaddleSports is hosting a Solar Eclipse Paddling Event, which costs $135 and includes snacks and eclipse glasses. You can call 617-548-1775 or email info@cohassetpaddlesports.com to register. 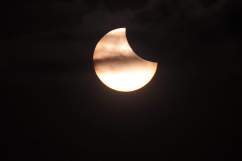 Loading more stories
wpDiscuz
0
0
Would love your thoughts, please comment.x
()
x
| Reply
Massachusetts is not a great place to experience the Great American Solar Eclipse of 2017, but that doesn't mean we're completely left out.