The 2017 Solar Eclipse is finally here and, though New York will not be able to view the eclipse in its totality, a partial eclipse will be visible. Here’s your guide on what time of day the eclipse is visible in NYC, the map and path of totality, weather forecasts, traffic news and more.

ECLIPSE TIME: According to The NY Times, eclipse action will start at 1:23 p.m. ET and a black orb will appear to gradually darken over the sun until 2:44 p.m. ET. This is when the maximum part of the sun will be covered in the New York City area. By 4 p.m. ET, the skies will return to normal. The NY Times also reports that the next solar eclipse in the area will not occur until 2021.

WEATHER: Clear skies are expected in New York City and temperatures are estimated to reach a high of 89 degrees.

PATH RANGE: The eclipse will begin in Oregon and conclude in South Carolina. New York is not in the path of totality.

A solar eclipse will be visible in the United States on August 21. See a map of it and count down the minutes here: https://t.co/JnUY2dprQo pic.twitter.com/1rEk0HejLS

TRAFFIC: Because New York City is not in the path of totality, there is not an expected amount of extra traffic for today. Plus, much of NYC transportation is foot traffic, bus and train.

ADDITIONAL DETAILS: There are many watch parties going on throughout the city and the NY Times reports them being at the American Museum of Natural History on the Upper West Side; the Intrepid Sea, Air & Space Museum in Midtown; Pioneer Works in Red Hook, Brooklyn; Brooklyn Grange in Fort Greene; and at public libraries like Pelham Bay Library and West Farms Library in the Bronx and the Clinton Hill Library in Brooklyn. People are in a frenzy to try to find safety glasses last-minute for the eclipse, but you may be out of luck. And, be careful not to pick up a pair of fake glasses or you could do major damage to your eyes. 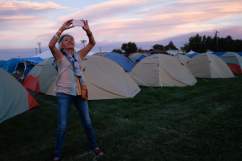 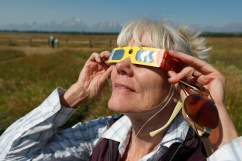 What Happens If You Look Directly at the Solar Eclipse? Why Is it Bad?

Read More
Solar Eclipse
Get the rundown on what to expect with the 2017 Solar Eclipse in New York City. Check out the NYC time of the eclipse, weather, map info and more.