ECLIPSE TIME: For those viewing the eclipse in San Antonio, you can start to see the moon cross in front of the sun at 11:40 a.m. The eclipse will last approximately two hours and 58 minutes. The peak time for viewing the eclipse in San Antonio is at 1:09 p.m. At this time, the moon will cover the sun the most in your area. It will get continuously darker up until this time and then will get progressively lighter in the minutes that follow. The eclipse will be completely over at approximately 2:38 p.m.

Map of the Solar Eclipse path across Canada and the United States, Aug. 21 2017 https://t.co/REvEPUzLOu pic.twitter.com/z0lTjEvuQu

WEATHER: The weather in San Antonio is partly cloudy today. Although the skies won’t be completely clear, you should still be able to view the eclipse this morning and into this afternoon.

BEST PLACES TO WATCH ECLIPSE: You can watch the eclipse at the San Antonio Public Library or the Leon Valley Public Library. Both locations have solar eclipse glasses that you can borrow to see the event. Viewing parties in San Antonio are happening at The Scobee Planetarium and at Chuy’s (they are hosting Blackout 2017). If you have protective eyewear and you want to head out to see the solar eclipse on your own, try heading to Guadalupe River State Park or Lockhart State Park.

For a list of solar eclipses that have been visible in San Antonio, Texas, in the 20th and 21st centuries, click here. 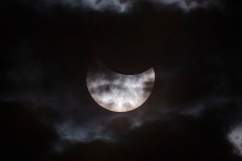 Solar Eclipse in Texas: Where to Get Glasses & Where to Watch