Totality will occur on a strip of land beginning at the Pacific coast, through northern Mexico, and then in the United States through Texas, Arkansas, Missouri, Illinois, Kentucky, Indiana, Michigan, Ohio, Pennsylvania, New York, northern Vermont, and New Hampshire.

The eclipse will also be visible in Canada, with totality crossing parts of Ontario, Quebec, New Brunswick, Prince Edward Island, and Newfoundland Island.

Here’s a map showing the eclipse’s path, as shared by NASA. It’s not technically running from coast to coast in the U.S., but it will still cover a large section of the U.S., plus Mexico and Canada.

This is the first total solar eclipse visible in Mexico since 1991.

This GIF shows the path of the totality on that day:

Mark your calendars. This solar eclipse will be just as exciting as the one today, since many parts of North America that aren’t in the path of totality this time around will be in 2024. 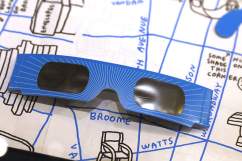 Loading more stories
wpDiscuz
2
0
Would love your thoughts, please comment.x
()
x
| Reply
See a map and the path of totality for the next total solar eclipse that is coming to the United States. People who missed it today will get another chance.