The Great American Solar Eclipse of 2017 is upon us. It’s a big deal scientifically. According to Google, it’s been 99 years since a “total eclipse crossed the width the United States.”

Even those outside the path of totality, though, will have a chance to see a rare scientific phenomenon.

1. Solar Eclipses Are Caused by Periodic Alignments of the Earth, Sun & Moon

First of all, what is a solar eclipse?

“This celestial event is a solar eclipse in which the moon passes between the sun and Earth and blocks all or part of the sun for up to about three hours, from beginning to end, as viewed from a given location,” according to NASA. “For this eclipse, the longest period when the moon completely blocks the sun from any given location along the path will be about two minutes and 40 seconds. The last time the contiguous U.S. saw a total eclipse was in 1979.”

You may be wondering how solar eclipses happen? NASA explains.

“Eclipses, whether solar or lunar, occur because of the periodic alignments of the sun, Earth, and moon. These three bodies, orbit in space in very predictable paths (yes, the sun orbits too. It orbits the galaxy once every 200 million years!)” according to NASA.

When the moon moves in between the earth and the sun – essentially blocking the sun – you’ve got a solar eclipse.

“The Moon moves right to left in its orbit around the Earth. The shadow it casts hits the Earth during the August 21, 2017 total solar eclipse,” reports NASA.

“Solar Eclipses happen when the moon moves between Earth and the sun. You might think that this should happen every month since the moon’s orbit, depending on how it is defined is between about 27 and 29 days long. But our moon’s orbit is tilted with respect to Earth’s orbit around the sun by about five degrees.”

AmericanEclipseUSA explains that “an eclipse can only occur during the times of the New Moon and Full Moon, when the Sun, Earth and Moon are essentially lined up.”

It takes perfect alignment for the eclipse to happen, though. “The plane of the Earth’s orbit is called the plane of the ecliptic,” AmericanEclipseUSA explains.”The places where the Moon’s orbit crosses the ecliptic are the nodes. Eclipses can only occur when the Sun and Moon are both located sufficiently close to one of the nodes.”

2. All of North America Will See the Solar Eclipse but Not Everyone’s in the ‘Path of Totality’

2017 Total Solar Eclipse's Path Across the U.S.A view of the United States during the total solar eclipse of Aug. 21, 2017, showing the umbra (black oval), penumbra (concentric shaded ovals) and path of totality (red). This version includes images of the sun, showing its appearance in a number of locations, each oriented to the local horizon. Credit: NASA/Goddard Space Flight Center…2016-12-14T22:35:40.000Z

There are two main terms to remember here: Total and partial eclipse. According to NASA, the “total eclipse” path, “where the moon will completely cover the sun and the sun’s tenuous atmosphere – the corona – can be seen, will stretch from Lincoln Beach, Oregon to Charleston, South Carolina. Observers outside this path will still see a partial solar eclipse where the moon covers part of the sun’s disk.”

People in 14 states will experience a total eclipse. “Everyone in the contiguous United States, in fact, everyone in North America plus parts of South America, Africa, and Europe will see at least a partial solar eclipse, while the thin path of totality will pass through portions of 14 states,” NASA reports.

Which states? NASA has the path of totality mapped:

You can also go to the NASA site and download maps for each state in the path of totality here.

Where will the eclipse start? According to AmericanEclipseUSA, “The Moon’s shadow will first make landfall in Oregon, coming off the Pacific Ocean. Moving at faster than the speed of sound, the shadow of the Moon will head eastward, across Idaho and into Wyoming and Nebraska. The eclipse path continues into Kansas and Missouri, while the local duration of eclipse increases.” Once it reaches South Carolina, the eclipse will move over the Atlantic. 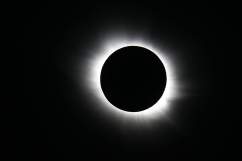 How Dark Will It Get During the Solar Eclipse 2017?

3. Human Beings Have Been Writing About Solar Eclipses for 5,000 Years

Solar eclipses are not a new phenomenon and, for thousands of years, they have fascinated human beings (and frightened more than a few animals, who are prone to thinking it’s suddenly become nighttime.) Over time, a number of cultural myths have developed; it’s not true, for example, that pregnant women should worry about their health during a solar eclipse (other than not looking directly at it, like everyone else.)

According to NASA’s solar eclipse history page, “The earliest writings we have showing that people paid attention to eclipses in any official way are around 5,000 years old.”

ScienceCasts: The 2017 Total Solar EclipseVisit science.nasa.gov/ for more. On August 21, 2017, a continent-spanning wave of instruments from home-made pinhole cameras to the most sophisticated telescopes in operation today will be trained on the Eclipse Across America. eclipse2017.nasa.gov2017-08-18T15:13:27.000Z

The ancient Irish appear to have experienced eclipses. “In 1999, Irish Archeoastronomer Paul Griffin investigated the Loughcrew Cairn L Megalithic Monument in Ireland, and discovered that a set of spiral-shaped petroglyphs that might correspond to a solar eclipse which occurred on November 30, 3340 BCE. The symbols display a consistent coding of the sun, moon and horizon, and of the 92 tracks of total solar eclipses, only the one for 3340 BCE visible at this site displayed the same geometric relationships,” reports NASA.

4. Solar Eclipses Occur as a Result of ‘Cosmic Coincidence’

According to the American Astronomical Society, we have a “cosmic coincidence” to thank for the science of the solar eclipse.

“The Sun’s diameter is about 400 times that of the Moon. The Sun is also (on average) about 400 times farther away. As a result, the two bodies appear almost exactly the same angular size in the sky — about ½°, roughly half the width of your pinky finger seen at arm’s length. This truly remarkable coincidence is what gives us total solar eclipses. If the Moon were slightly smaller or orbited a little farther away from Earth, it would never completely cover the solar disk,” the AAS explains on its solar eclipse science educational website.

GreatAmericanEclipse also notes that the moon and sun aren’t really the same size. The “Sun is just about the same apparent size in our sky as the Moon. While the Sun is actually about 400 times larger in diameter than the Moon, the Moon is also about 400 times closer than the Sun. Therefore, the Sun and the Moon appear to be about the same size in our sky,” the site explains.

We won’t see solar eclipses forever, most likely, though.

“The Moon is ever so slowly moving away from our planet at rate of about 1.5 inches (3.8 centimeters) per year. As it recedes, its average apparent diameter shrinks,” reports AAS. “Eventually, the Moon will never be large enough to completely cover the Sun, and total eclipses will no longer be visible from Earth’s surface.” 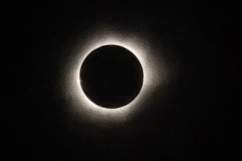 5. Make Sure You Use Proper Safety Precautions When Viewing a Solar Eclipse

Take great care to protect your eyes during the eclipse by not looking directly at it. A better option if you don’t have solar eclipse glasses? Watch one of NASA’s livestreams of the solar eclipse.

According to NASA, you can injure your eyes if you look directly into the sun. NASA also says, “looking directly at the sun is unsafe except during the brief total phase of a solar eclipse (‘totality’), when the moon entirely blocks the sun’s bright face, which will happen only within the narrow path of totality.”

NASA continues, “The only safe way to look directly at the uneclipsed or partially eclipsed sun is through special-purpose solar filters, such as “eclipse glasses” (example shown at left) or hand-held solar viewers. Homemade filters or ordinary sunglasses, even very dark ones, are not safe for looking at the sun; they transmit thousands of times too much sunlight.” NASA’s website contains detailed safety tips.

How Often Do Solar Eclipses Occur?