Getty President Donald Trump makes a statement on the violence this past weekend in Charlottesville, Virginia at the White House on August 14.

Less than three hours after standing in front of a podium and calling out hate groups, President Donald Trump is expected to answer more questions about the domestic terror attack in Charlottesville, Virginia.

Trump, in the middle of a 17-day vacation, is expected to sign a memo on addressing China’s laws, policies, practices and actions related to its intellectual property, innovation and technology. In addition, media members are expecting Trump to elaborate on remarks he gave earlier in the day condemning an attack during a counter protest in Charlottesville.

The remarks are scheduled to take place at 3 p.m. Eastern and can be watched live in the video below:

During his speech in the morning, Trump touted his administration’s accomplishments thus far, saying that his policies have helped create “one million jobs” so far.

Then, Trump directly responded to the attack in Virginia that left 32-year-old Heather Heyer dead and 19 others injured.

Trump said that after meeting new FBI Director Christopher Wray and Attorney General Jeff Sessions in the morning, he decided to open up a civil rights investigation into the attack.

“To anyone who acted criminally in this weekend’s racist violence, you will be held fully accountable,” Trump said. “Justice will be delivered.”

Trump reiterated the statement he gave hours after the tragedy, saying there’s no place in America for the hatred the demonstration brought forth.

“We condemn in the strongest possible terms this egregious display of hatred, bigotry and violence, it has no place in America,” Trump said. “And as I’ve said many times before, no matter the color of our skin, we all live under the same laws. We all salute the same great flag and we are all made by the same almighty God.

“We must love each other, show affection for each other and unite together in condemnation of hatred, bigotry and violence. We must rediscover the bonds of love and loyalty that bring us together as Americans.”

Trump also called out the KKK, the neo-Nazis and “other hate groups that are repugnant to everything we hold dear as Americans.” He also directly named Heyer, saying that the nation is offering her family “our thoughts, our prayers and our love.” 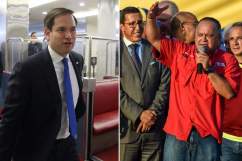