President Trump briefly took off his solar eclipse glasses to take a look at the sun on Monday.

President Donald Trump took a moment out of his day Monday to join the rest of the nation in checking out the solar eclipse.

Trump was joined on a balcony at the White House by First Lady Melania and his son, Barron, as they witnesses a partial eclipse in Washington D.C.

Watch the Trump family check out the D.C. eclipse in the video below:

However, it was the moment right before Trump put on his solar eclipse glasses that caused the internet to stir. Trump briefly looked up directly at the sun, something NASA strongly advises against because of its potential to cause damage to your eyes.

Watch the video of Trump looking at the sun without the glasses below:

“Looking directly at the sun is unsafe except during the brief total phase of a solar eclipse (“totality”), when the moon entirely blocks the sun’s bright face, which will happen only within the narrow path of totality,” NASA says. “The only safe way to look directly at the uneclipsed or partially eclipsed sun is through special-purpose solar filters, such as “eclipse glasses” (example shown at left) or hand-held solar viewers. Homemade filters or ordinary sunglasses, even very dark ones, are not safe for looking at the sun; they transmit thousands of times too much sunlight.”

The eclipse started in Oregon and made its way toward South Carolina. That meant many cities on the East Coast got to experience a total, or partial eclipse.

The moon covered 81.1 percent of the sun in the D.C. area, meaning it didn’t go completely completely dark like it did in some cities such as Nashville.

That. Was. Flipping. Awesome. #eclipse #Nashville More pics tonight when I have a chance to go through them all. pic.twitter.com/EVCuypmkSU

Monday marked the first time in 99 years the United States has experienced a total solar eclipse. 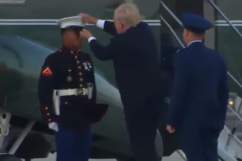 WATCH: Trump Picks up Marine’s Hat & Replaces It After It’s Blown off by the Wind