President Donald Trump has arrived in Corpus Christi, where he will see the damage caused by Hurricane Harvey. Trump will also head to Austin later and will meet with emergency response officials in both cities. The president is being accompanied by First Lady Melania Trump, HUD Secretary Ben Carson and HHS Secretary Tom Price.

Trump left a rainy Washington D.C. shortly after 9:00 a.m. Melania was criticized on Twitter for wearing high heels as she walked to Air Force One. However, when she arrived, she put sneakers on. Trump was scheduled to arrive at Corpus Christi International Airport at 12:25 p.m., and then heads to a briefing on relief efforts with local leaders.

After only about 90 minutes in Corpus Christi, Trump is scheduled to leave for Austin, the Texas state capital, to tour the Emergency Operations Center at the Texas Department of Public Safety and have another meeting with Texas Governor Greg Abbott. After that, Trump will head back to Washington.

Trump will not be visiting Houston during this trip. The nation’s fourth-largest city has been struck by catastrophic flooding and is expected to see 50 inches of rain by the time Harvey leaves the area. KHOU reports that at least nine people have been killed in the Houston area, including six members of a family who drowned while trying to escape.

“We see neighbor helping neighbor, friend helping friend and stranger helping stranger,” Trump Said during a Monday press conference. “We are one American family. We hurt together, we struggle together and believe me, we endure together.”

Trump also praised the leadership in Texas, adding, “We will get through this. We will come out stronger. And believe me, we will be bigger, better, stronger than ever before. The rebuilding will begin and in the end it will be something very special.”

Harvey is now a tropical storm, but will continue battering Texas and Louisiana through the rest of the week. American Red Cross spokesman Lloyd Ziel told the Associated Press that there 5,500 evacuees have already arrived at the George R. Brown Convention Center in Houston, far exceeding the 5,000 capacity. The Red Cross has already opened shelters throughout Southeast Texas. You can find the full list at RedCross.org. 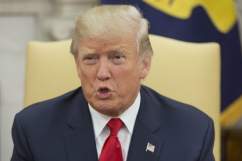