A knife attack in Turku, Finland, has left several people injured. Turku is located in the southwest region of the country and has a population of 175,945. It is located approximately 85 miles west of Finland’s capital city of Helsinki. The native language in Turku, the second largest city in Finland, is Swedish.

It is a popular tourist destination and many travelers are able to visit the city by taking a ferry from Sweden. Known for its rich cultural history, Turku provides a wide variety of things to do for people of all ages. People who visit Turku enjoy the architecture of its buildings, the art, and, perhaps what it’s most known for, Turku Castle.

“Founded in 1280 at the mouth of the Aurajoki, mammoth Turku Castle is easily Finland’s largest. Highlights include two dungeons and sumptuous banqueting halls, as well as a fascinating historical museum of medieval Turku in the castle’s Old Bailey. Models depict the castle’s growth from a simple island fortress to a Renaissance palace. Guided tours in English run several times daily from June to August.”

Other attractions include Forum Marinum maritime center, the Pharmacy Museum and Qwensel House, and the Aboa Vetus & Ars Nova, a contemporary art museum. There is also the Turku Art Museum, the Market Hall, and the Main Library, all of which draw a fair share of visitors on any given day of the week.

The symbol of the city is its cathedral which is located in the center of Turku near Old Great Square.

In the summer months, Turku hosts several different events and festivals ranging from music to art and design. In July 2017, the fleet for the The Tall Ships Races event sailed through Turku on their way to Klaipeda, Lithuania.

Those visiting Turku can also enjoy a wonderful culinary experience; the city boasts some of the best restaurants in the area. 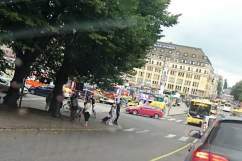 Read More
Finland
The city of Turku, Finland, is located in the southwest region of the country. It is the second largest city in the country.