The woman who won the largest single ticket Powerball jackpot in history came forward less than 12 hours after finding out about her big win and less than a day after buying the winning ticket.

Mavis Wanczyk, 53, bought the $758 million ticket at a gas station in Chicopee, Massachusetts, about 2:30 p.m. Wednesday and revealed herself to the public at a press conference Thursday.

There was a chance we might have never known the winner’s name.

The person who won the lottery must claim the prize at the Lottery Headquarters in Braintree, Massachusetts. Five percent will be withheld and sent to the Mass. Department of Revenue and 25 percent will be sent to the Internal Revenue Service. According to Massachusetts law, winners have one year to claim their prize money. One person waited until just hours before that deadline to claim his wins. (If you win a Massachusetts lottery, call the Lottery Headquarters to make sure this deadline is still in effect and hasn’t been changed or moved up.)

As of February 2016, a total of nearly $57 million went unclaimed in Massachusetts lottery prize money, due to tickets expiring without the buyers ever claiming their wins. Last year, a dozen of those winning tickets were for $10,000.

But that’s not the only reason why you might have never heard the winner’s name. In Massachusetts, you can keep your identity a secret if you win by forming a lottery trust, McNamara & Yates P.C. reported. The trustee will hold the legal title of the lottery property, while the beneficiary (the winner) holds the equitable title. Typically, the winner assigns a professional attorney as the trustee and picks someone unaffiliated with them in order to help keep their identity a secret.

In other words, if the winner had wished to remain anonymous, she could have done so by using a trust to claim the prize instead of claiming it personally. She could also have waitd nearly a year to claim the prize, when all the hype about the winner’s name has died down and people have moved on to other interests.

Wanczyk said she came forward quickly to get it over with and never considered keeping her name private.

“I just wanted to do this, I wanted to just get it over, done with and then everybody will just leave me alone,” she said with a smile and a laugh.

When asked what she would be doing to celebrate tonight, she joked, “I’m going to go hide in my bed.” 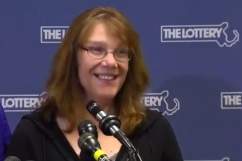 Loading more stories
wpDiscuz
0
0
Would love your thoughts, please comment.x
()
x
| Reply
Do we know the name of the person who won the $759 million Powerball yet? When will know their identity? Learn more about how it works in Massachusetts.