Coulter’s turn against Trump came after his meeting with House Minority Leader Nancy Pelosi and Senate Minority Leader Chuck Schumer on Wednesday. The two Democratic leaders said they “agreed to enshrine the protections of (the Deferred Action for Childhood Arrivals program) into law quickly, and to work out a package of border security, excluding the wall, that’s acceptable to both sides,” notes CNN.

Trump took to Twitter on Thursday, telling his followers that “no deal was made” on DACA.

“No deal was made last night on DACA. Massive border security would have to be agreed to in exchange for consent. Would be subject to vote,” Trump wrote. “The WALL, which is already under construction in the form of new renovation of old and existing fences and walls, will continue to be built.”

Trump also wrote, “Does anybody really want to throw out good, educated and accomplished young people who have jobs, some serving in the military? Really… They have been in our country for many years through no fault of their own – brought in by parents at young age. Plus BIG border security.”

Pelosi and Schumer also issued another statement, saying that Trump “made clear he intends to pursue” building a wall along the U.S.-Mexico border “and we made clear we would continue to oppose it.”

“While DACA and border security were both discussed, excluding the wall was certainly not agreed to,” White House Press Secretary Sarah Huckabee Sanders tweeted.

Despite the clarifications from the two sides, the confusing statements led to members of the far right condemning Trump’s support of the “dreamers.”

At this point, who DOESN'T want Trump impeached? https://t.co/g1mMhmm8ng

If we're not getting a wall, I'd prefer President Pence. https://t.co/g1mMhmm8ng

“We’re right now renovating large sections of wall. Massive sanctions. Making it brand new. We’re doing a lot of renovations we’re building four different samples of the wall to see which one we’re going to choose. The wall is going to be built — it will be funded a little bit later,” Trump told reporters as he left the White House for Florida.

President Barack Obama signed DACA as an executive order in 2012 after getting frustrated with Congress’ inaction on immigration. The program, used by around 800,000 individuals, protects the children of illegal immigrants from deportation if they get an education and have a clean criminal record. After Trump’s decision earlier this month, the government stopped accepting applications for DACA, although it will continue processing applications received by September 5 and renewal applications sent by October 5, 2017.

Democrats and Republicans have both supported the DREAM Act, which would make DACA a permanent policy. 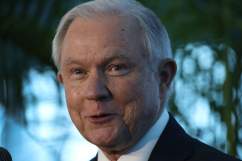 Loading more stories
wpDiscuz
1
0
Would love your thoughts, please comment.x
()
x
| Reply
Ann Coulter now agrees that President Donald Trump should be impeached after he struck an apparent deal with Democrats on DACA, but Trump says there's no deal.