Photo by Spencer Platt/Getty Images NEW YORK, NY - SEPTEMBER 19: President Donald Trump speaks to world leaders at the 72nd United Nations (UN) General Assembly at UN headquarters in New York on September 19, 2017 in New York City. This is Trump's first appearance at the General Assembly where he addressed threats from Iran and North Korea among other global concerns.

Talking about the threat of nuclear war, Trump said: “Rocket Man is on a suicide mission for himself and for his regime.”

Trump spoke before leaders and delegates from 193 members of the United Nations General Assembly in New York.

“It is an outrage that not only would some nations trade with such a regime, but would army, supply and financially support a country that imperils the world with nuclear conflict,” Trump said. “No nation on Earth has an interest in seeing this band of criminals arm itself with nuclear weapons and missiles.”

“The United States has great strength and patience. But if it is forced to defend itself or its allies, we will have no choice but to totally destroy North Korea,” he said.

Watch his comments on North Korea in the video above, starting at the 40:55 minute mark.

The scourge of our planet today is a small group of rogue regimes that violate every principle on which the United Nations is based. They respect neither their own citizens nor the sovereign rights of their countries. If the righteous many do not confront the wicked few, then evil will triumph. When decent people and nations become bystanders to history, the forces of destruction only gather power and strength.

No one has shown more contempt for other nations and for the well-being of their own people than the depraved regime in North Korea. It is responsible for the starvation deaths of millions of North Koreans and for the imprisonment, torture, killing and oppression of countless more.

In a tweet on Sunday, Trump said he spoke with South Korean President Moon Jae-in about the North Korean threat and called Kim “Rocket Man.”

I spoke with President Moon of South Korea last night. Asked him how Rocket Man is doing. Long gas lines forming in North Korea. Too bad!

Trump told reporters in August that “North Korea best not make any more threats to the United States.”

“They will be met with fire and fury like the world has never seen,” he said

Earlier this month, Trump sent several tweets warning North Korea to stop the advancement of its nuclear weapons program after it conducted a test of an intercontinental ballistic missile. 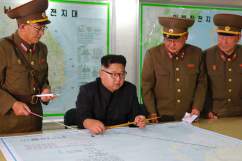 North Korea has conducted a major Nuclear Test. Their words and actions continue to be very hostile and dangerous to the United States…..

..North Korea is a rogue nation which has become a great threat and embarrassment to China, which is trying to help but with little success.

South Korea is finding, as I have told them, that their talk of appeasement with North Korea will not work, they only understand one thing!

I will be meeting General Kelly, General Mattis and other military leaders at the White House to discuss North Korea. Thank you.

The United States is considering, in addition to other options, stopping all trade with any country doing business with North Korea. 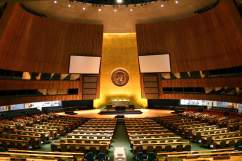 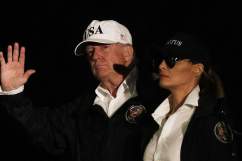