After days of anticipation, Hurricane Irma has made landfall on the Mainland United States, tearing through Marco Island, Florida, and Naples as a Category 3. After traveling over Cuba for a number of hours, Irma had weakened, but regained strength and hit the Florida Keys as a Category 4 storm.

Most recently, the storm has slowed to a Category 2 as it heads toward Fort Myers. The storm is expected to slow down even more as it approaches the Tampa/St. Petersburg region, but she’s still bringing gusty winds and heavy rain along with her.

Lee County has enacted a curfew, from 8 p.m. to 7 a.m., as reported by the News-Press. That curfew does apply to the city of Fort Myers as well, and is in effect daily until government officials rescind the order.

The video below, featuring ABC News’ Tom Llamas, gives you a good indications of conditions in the area.

.@TomLlamasABC: "It's getting worse by the minute" as center of Hurricane #Irma barrels down on Fort Myers, FL https://t.co/5Kz3EN1ESV pic.twitter.com/tAwiSixE0F

The below video was taken from the balcony of a Fort Myers hotel room.

Hurricane Irma has claimed at least one life, according to ABC News. The Monroe County Sheriff’s Office, which holds jurisdiction over Key West, reports that a man was killed after losing control of a the vehicle he was driving. The man was transporting a generator and his truck was overtaken by tropical-storm force winds. 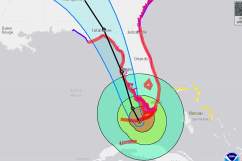