As of September 5, Hurricane Irma has been upgraded to a Category 5, according to the National Hurricane Center. As you can see in the NHC announcement below, Irma is expected to bring “life-threatening wind, storm surge, and rainfall” to anyone in her path.

Key Messages on Category 5 Hurricane #Irma for 8am EDT pic.twitter.com/7dsEmJX4yY

A hurricane is categorized by wind speed. The scale in which hurricanes are measured is called the Saffir-Simpson Hurricane Wind Scale. A Category 5 storm will have winds over 157 mph. Hurricane Irma currently has winds over 175 mph, which is extremely dangerous.

“A high percentage of framed homes will be destroyed, with total roof failure and wall collapse. Fallen trees and power poles will isolate residential areas. Power outages will last for weeks to possibly months. Most of the area will be uninhabitable for weeks or months.”

The storm is expected to weaken — slightly — before moving over the Caribbean islands. The storm’s current track has it near or over Antigua and Barbuda by late Tuesday/early Wednesday, likely as a Category 4, and then over the U.S. Virgin Islands and Puerto Rico by Wednesday afternoon. The state of Florida should start seeing increased winds and rain by Saturday.

The map below shows the storm’s projected path. Although the strength of the storm is set to be downgraded to a Category 4, it will still be very dangerous.

According to CNN, Hurricane Irma has the potential to be “especially intense.” This is due to the area in the Atlantic where she formed.

“Irma is a classic ‘Cape Verde hurricane,’ meaning it formed in the far eastern Atlantic, near the Cape Verde Islands (now known as the Cabo Verde Islands), before tracking all the way across the Atlantic, CNN meteorologist Brandon Miller said. And Cape Verde storms frequently become some of the largest and most intense hurricanes. Examples include Hurricane Hugo, Hurricane Floyd and Hurricane Ivan.” 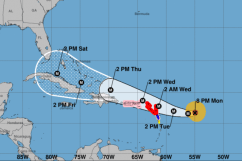 Loading more stories
wpDiscuz
0
0
Would love your thoughts, please comment.x
()
x
| Reply
Hurricane Irma is now a Category 5 storm. Her wind speeds are topping 175 mph and she is an extremely dangerous storm.