Hugh Hefner, the founder of Playboy magazine has died at the age of 91. The Playboy Twitter account tweeted Wednesday night that the publisher of the adult magazine died of natural causes.

Hefner was born in Chicago in 1926 to parents who both worked as teachers. He once served as a writer for a military newspaper in the U.S. Army for two years and in 1953 took out a mortgage to launch the magazine. Originally, Hefner planned to call the magazine Stag Party.

Hefner had three wives and five partners in his lifetime with four children.

Here’s what you need to know about Hefner’s family:

1. Hefner’s First Wife Admitted an Affair Prior to Their Wedding

Hefner’s first marriage came in 1949, when he married Mildred Williams, also known as “Millie.” The two met at Northwestern University and had a romantic relationship for year before tying the knot. They ended up having two children: Christie (born in 1952) and David (1955).

Prior to their wedding in 1949, though, Millie admitted to having an affair while Hefner was away in the Army. The admission from his soon-to-be wife was the “most devastating moment” of his life, he said when describing his first sexual experience just before they were married.

“I had literally saved myself for my wife, but after we had sex she told me that she’d had an affair,” he said in 2007. “That was the most devastating moment in my life. My wife was more sexually experienced than I was. After that, I always felt in a sense that the other guy was in bed with us, too.”

In an E! True Hollywood Story in 2006, Hefner said Millie would allow him to have sex with others because of the guilt she felt about her infidelity. The two ended up getting divorced in 1959 and Hefner had numerous lovers over the years.

2. Hefner’s Daughter is the CEO of Playboy Industries

When Millie and Hefner divorced, Christie was just 5-years old and moved with her mother to Wilmette, Illinois, where she went to school.

After attending college, she worked as a freelance writer before moving back to Chicago and working at Playboy. After four years working at the company, she was promoted to vice president. Then, in 1982, Christie was named the president of Playboy Enterprises and was named chairman of the board and CEO in 1988.

It was Christie’s decision in 2008 to eliminate the companies DVD division and get rid of staff, and she announced her intentions to step down from the position in 2008, which took effect January 31, 2009.

After leaving Playboy, Christie spent more time doing charitable work and said she was inspired by the election of Barack Obama as president.

“Just as this country is embracing change in the form of new leadership, I have decided that now is the time to make changes in my own life as well,” she said after stepping down. 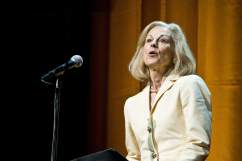 3. Hefner Married the Playmate of the Year in 1989

After years of living the single life and having numerous relationships with women, Hefner decided to settle down after he suffered a stroke in 1985 when he was 59. He ended up re-evaluating his lifestyle and married Kimberley Conrad in 1988.

Conrad and Hefner were 36-years apart in age and had two sons together: Marston Glenn (born in 1990) and Cooper Bradford (born in 1991). The family lived in the Playboy Mansion, which had been transformed into a family home. However, Hefner and Conrad ended up separating in 1998 and she moved into a home right next door to the Playboy Mansion.

Cooper told Business Insider in an exclusive interview in 2015 that the Playboy Mansion acted as a “traditional home” for he and Marston.

“When my mom and dad separated and my dad bought the mansion next door, he broke down the wall and my brother and I went back and forth between both properties,” Cooper said in the interview. “My parents kept us sheltered from adulthood like any other parent does. We were kept away from the parties when we were growing up.”

Cooper said he had a few nights with his friends where he’d sneak down from his room and check out the parties with Playboy bunnies that were going on.

This morning, my dear brother and best friend passed away. I love you, Keith. Rest in peace. pic.twitter.com/Xm5hHuZ04M

Hefner’s younger brother Keith died one day before Hugh’s 90th birthday in 2016. The Playboy founder took to Twitter to remember him after his passing, referring to Keith as his “best friend.”

According to TMZ, Keith was battling cancer for some time and died from the illness.

Keith worked as an executive at Playboy for years and was the head of the training of the bunnies, as well as the publication’s modeling recruiter. In addition to his work at Playboy, Keith tried acting and had some small roles on movies and TV shows. He was married to model Caya Hefner, who remembered her husband on Twitter with a series of photos.

5. Hefner’s 3rd Wife Cut off Their Engagement 5 Days Before Their Wedding but They Reconciled Years Later

Hefner remained single for years after he and Conrad got a divorce. That’s until January 2009, when he and Crystal Harris started dating. After about a year of dating, Hefner and Harris became engaged. But on June 14, 2011, just five days before their wedding, Harris broke off the engagement.

The two reconciled in the years that followed and got married on December 31, 2012 at the Playboy Mansion. Hefner was 86 at the time while she was 26. 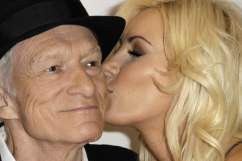 Loading more stories
wpDiscuz
0
0
Would love your thoughts, please comment.x
()
x
| Reply
Hugh Hefner, the founder of Playboy magazine, died at the age of 91 on Wednesday. Read about the members of Hefner's family.