The only thing more famous than Hefner himself and his Playboy bunnies was the Playboy Mansion, an iconic estate located in Beverly Hills, California.

The mansion has been featured throughout pop culture over the years and has seen more than its fair share of celebrity guests, including Elvis Presley and John Lennon.

Hefner passed away peacefully at the Playboy Mansion surrounded by friends and family.

Hugh Hefner, 91, died at the Playboy Mansion surrounded by loved ones https://t.co/3WhAmbqGJm pic.twitter.com/25gzocsFoh

1. Construction on the Mansion Began in 1927

#TBT to @HughHefner's first roller disco party at the Playboy Mansion. For more PB moments tap the link in our bio to watch the first ep of #AmericanPlayboy.

The mansion was built by Arthur R. Kelly in 1927 for Arthur Letts, Jr., who was the son of department store magnate Arthur Letts.

Playboy bought the mansion in 1971 for just over $1 million.

The estate is 20,000 square feet with 29 rooms, according to Curbed Los Angeles.

The house itself is about 20,000 square feet with 29 rooms, including a catering kitchen with walk-in fridge and freezer, a wine cellar that can be accessed through a secret door, theater with built-in pipe organ, gym, tennis court, six bedrooms (including a two-level master bedroom), six full bathrooms, two half-bathrooms, a great hall with 22-foot ceilings and “custom hand-carved oak panels,” and four offices.

But that’s just the house. The grounds also have a separate game house with “poker and pool tables, pinball machines, a piano and an old-fashioned Wurlitzer jukebox with jazz recordings”; a four-bedroom/two-bathroom guest house with solarium; a tennis court; and of course the swimming pool and grotto, which Playboy built after buying the property, and which are accompanied by four separate hot tubs, a koi pond, an outdoor kitchen and bar, and a bathhouse with changing rooms, sauna, gym, and “tanning area.”

Daren Metropoulos, the heir of the Hostess brand, bought the Playboy Mansion in 2016 for $100 million. The estate had been listed on the market for $200 million. 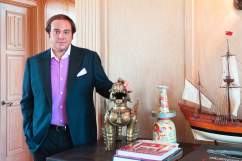 Part of the deal for the purchase of the house was that Hugh Hefner was allowed to live there until his death.

Daren Metropoulos, new owner of Playboy Mansion, at its sister house, his home since 2009. pic.twitter.com/VOlvqlAKq1

3. The Playboy Mansion Has a Zoo License

Playboy mansion is home to dozens of exotic animals. It is one of very few private homes that actually has a zoo. pic.twitter.com/NdBJ6QgBGK

The Playboy Mansion is one of only a few residences in Los Angeles that has a zoo license, according to Curbed Los Angeles.

4. The Playboy Mansion Has Been Featured in Numerous TV Shows and Movies

The Playboy Mansion is one of the most exclusive spots in Los Angeles, but if you couldn’t score an invitation to one of its legendary parties, you could live out the fantasy of swimming in the grotto through numerous television shows, movies and music videos.

The mansion was featured in Beverly Hills Cop, Charlie’s Angels: Full Throttle, Entourage, and the reality show “The Girls Next Door.”

There was even a 2002 documentary called “Playboy: Inside the Playboy Mansion.”

5. The Original Playboy Mansion Was Located in Chicago

The original Playboy Mansion was located in Chicago. Hugh Hefner bought the 70-rooms estate in 1959, according to Wikipedia. It was designed by architect James Gamble Rogers, who is best known for his buildings at Yale University and Columbia University.

The mansion boasted the original grotto, a swimming pool in the basement that had a glass wall. And there was a sign on the door that said “If you don’t swing, don’t ring” in Latin.

Loading more stories
wpDiscuz
0
0
Would love your thoughts, please comment.x
()
x
| Reply
The only thing more famous than Hugh Hefner himself and his Playboy bunnies was the Playboy Mansion, an iconic estate located in Beverly Hills, California.