Twitter A video posted to Twitter appears to show a law enforcement officer shooting a man outside a 7/11 convenience store in Huntington Beach, California.

The moment a male suspect outside of a 7/11 convenience store in Huntington Beach, California was fatally shot by a law enforcement officer was captured in a chilling witness video.

In the video posted to Twitter on Friday, an officer is seen with his gun drawn and pointed at a male dressed in all black outside the 7/11. The suspect appears to be wielding something in his right hand as he stumbles on a curb and stands up.

Suddenly, the officer shoots the unidentified man, firing at least seven shots. The suspect appears to hesitate before falling backward and to the ground. As he lays immobile on the ground, the officer grabs his radio from the ground and calls for assistance while monitoring the suspect.

Watch the video posted to Twitter below, but be warned that it contains graphic and disturbing content.

Huntington Beach Police Information Officer Angela Bennett told Heavy that the incident occurred during the morning hours at the 7/11 in the 6000 block of Edinger Avenue. She said the suspect got into an “altercation” with the responding officer before the shooting occurred. The suspect was transported to a nearby hospital, where he later died.

“At about 9:30 this morning an officer contacted a male outside the 7/11 at Springdale Road and Edinger and an altercation ensued,” Bennett said. “An officer-involved shooting followed, and we’re in our early stages of investigation to determine the details.”

The altercation with the officer can be seen in another video posted to Twitter by the same user. In it, the officer appears to have the suspect pinned to the ground. There appears to be a struggle on the ground between the two, and the suspect grabs at the officer’s waist, taking an unknown item out of his belt. The suspect is able to get away from the officer, who brandishes his weapon.

The social media user who captured the video said the suspect grabbed the officer’s “clip,” though police have not confirmed that.

A reported witness near the scene said on social media that the officer tased and then shot the suspect, who was “holding a girl hostage” and then “tried running.”

The shooting occurred nearby Marina High School, and it was momentarily placed on lockdown due as a precaution to its proximity of the incident.

The officer-involved shooting is the seventh one things year in Huntington Beach, the highest in the past 10 years, the Los Angeles Times reported.

On September 7, a 29-year old was wounded by police gunfire after officers responded to a report of a vandal slashing tires in the area. According to police, Garrett Meyer walked up to the officers with a knife and officers opened fire. Two officers responding to the scene were wounded by “friendly fire,” investigators said. 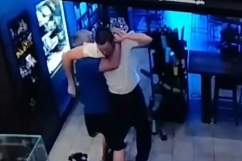