NOAA The NOAA's map of wind speed from Irma.

Hurricane Irma became a Category 5 hurricane Tuesday morning and is now battering the northern Leeward Islands. One of the countries that took a direct hit is Antigua and Barbuda. Officials in the island country have made preparations and the airport V.C. Bird International Airport has been closed. The hurricane reached Antigua and Barbuda overnight.

NOAAThe NOAA’s map of wind speed from Irma. The white dot shows where Irma was at 8:00 a.m. AST. Antigua and Barbuda, along with the other northern Leeward Islands, are in the purple area.

The latest public advisory from the U.S. National Oceanic and Atmospheric Administration at the National Hurricane Center confirms that the hurricane is still a Category 5 with maximum sustained winds reaching 185 mph (295 km/h). The storm is moving at 16 mph (26 km/h).

A warning is typically issued 36 hours before the anticipated first occurrence of tropical-storm-force winds, conditions that make outside preparations difficult or dangerous. In this case, for some of easternmost islands, the hurricane conditions are expected within the next 12 to 24 hours. Preparations to protect life and property should be rushed to completion.

Since Irma is already close to Antigua and Barbuda, flights to the area from the U.K. have already been cancelled. The U.K. Independent reports that British Airways cancelled a flight from Gatwick to Antigua already. The V.C. Bird International Airport on Antigua was closed, ABC News notes.

The islands are popular tourist destinations for U.K. residents, as the country is part of the Commonwealth of Nations. The U.K. Foreign Office already issued a statement cautioning vacationers.

Hurricane Irma is forecast to bring hazardous sea and weather conditions to north eastern parts of the Caribbean from around 6 September; you should follow the advice of the local authorities and any evacuation orders.

Meteorologist Lorne Salmon told the Antigua Observer that three to six inches of rainfall is expected, with up to 10 inches in isolated areas. However, the latest NOAA notice predicts eight to 12 inches in the northern Leeward Islands. Both islands are prone to flooding as they are both low-lying islands.

“If the 6 inches materialise, then we could very well have flooding in low-lying areas, and some of these could be life-threatening flash floods which could also lead to mudslides,” Salmon told the Observer. She also warned that there will be life-threatening swells caused by Irma.

The NOAA notes that Irma’s storm surge is expected to raise water levels by seven to 100 feet above normal tide levels.

Tessa Webber, the Disaster Coordinator on Barbuda, told the Antigua Observer that officials are prepared for the storm and they have already been in touch with the Antigua and Barbuda Red Cross.

“So far, we are intact and ready if the storm decides to come our way. I just came out of a meeting with the council, and we are more or less ready. The council building is already secured, and some homes,” Webber said, referring to the home of the Barbuda Council. “The council workers are also out there assisting with the removal of debris and other materials.”

Last year’s Hurricane Matthew was a major weather event for Antigua and Barbuda. The Antigua Met Service reported that the office at the Hewanorra International Airport measured 13.19 inches (335 mm) in just 12 hours from September 28 to September 29, 2016. 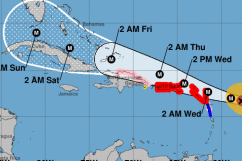 Loading more stories
wpDiscuz
0
0
Would love your thoughts, please comment.x
()
x
| Reply
The Caribbean islands of Antigua & Barbuda are among the first islands to feel the impact of Hurricane Irma. Here's a look at the latest forecast.