If you want to see what it looks like inside the eye of a hurricane so powerful it’s one of the strongest Atlantic storms in history, take a virtual ride with the Air Force Reserve’s 53rd Weather Reconnaissance Squadron.

Part of the 403rd Wing, based out of Keesler Air Force Base in Mississippi, the squadron is the only U.S. military unit that flies into tropical storms and hurricanes.

Pilots have been flying into the eye of Hurricane Irma, with maximum winds recorded at a jaw-dropping 185 miles per hour.

A look inside the eye of #HurricaneIrma courtesy Maj. Brad Roundtree. The @USAFReserve Hurricane Hunters will continue to fly until landfall pic.twitter.com/0I4fQziQ7E

Here's a still view of the #HurricaineIrma eye wall by Maj. Brad Roundtree from one of today's flights to collect data for the @NWSNHC pic.twitter.com/oDLCZAwYHE

Here is another look inside the eye of #HurricaineIrma thanks to the @USAFReserve Hurricane Hunters. pic.twitter.com/aN4G9YYeti

And check out this timelapse video taken shot by Maj. Kendall Dunn:

Dubbed “the Hurricane Hunters,” the squadron has 10 WC-130J aircraft, each outfitted with a crew of five: pilot, co-pilot, navigator, flight meteorologist and weather reconnaissance loadmaster.

Once a system becomes a tropical storm or hurricane, the Hurricane Hunters begin flying “fix” missions, which are at higher altitudes, ranging from 2,500 to 10,000 feet depending on the severity of the storm.

Aircrews fly through the eye of a storm four to six times to locate the low-pressure center and circulation of the storm. During each pass through the eye, they release a dropsonde, which collects weather data on its descent to the ocean surface, specifically gathering the surface winds and pressure.

The data the Hurricane Hunters collect is sent by satellite communication to the National Hurricane Center to assist them with their forecasts and storm warnings.

A look at the eye of #HurricaneIrma on the @AirForceReserve Hurricane Hunter's radar from today's day flight courtesy 1st Lt. Garrett Black. pic.twitter.com/e2l68aMnzi

“It’s important to be prepared. It’s why we do this, so we can have better forecasts and people have time to prepare and evacuate,” said Maj. Ryan Rickert, 53rd WRS aerial reconnaissance weather officer. 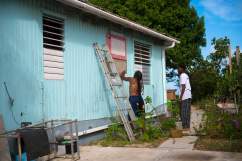 Read More
Air Force, Hurricane Irma, Weather
wpDiscuz
0
0
Would love your thoughts, please comment.x
()
x
| Reply
If you want to see what it looks like inside the eye of Hurricane Irma, take a virtual ride along with the Air Force Reserve’s 53rd Weather Reconnaissance Squadron.