Hurricane Irma is now a Category 5. The storm may not make a landfall in the U.S. until later this week or this weekend, but many regions in Florida are already preparing. The storm currently has 185 mph winds and the chance of direct impacts from Irma is increasing in the Florida Keys and portions of the Florida peninsula. But as the National Hurricane Center has emphasized, “It is too soon to specify the timing and magnitude of the impacts.”

Here’s everything we know so far about the hurricane’s potential impact in Fort Lauderdale.

Governor Rick Scott has declared a State of Emergency to prepare for the storm in Florida.

During a press conference on Tuesday, Broward County Mayor Barbara Sharief said that Broward County might experience tropical storm winds as soon as Friday evening. The county is already getting shelters ready and reaching out to residents with special needs, Fort Lauderdale Daily reported. But shelters should be used as a last resort. If evacuations are ordered, residents will be encouraged to leave the area instead.

Right now, residents are advised to finalize their emergency plans and prepare for the storm today, including making sure you have enough food, water, gas, and medications. Some stores are already running out of supplies, like a Publix in Davie near Fort Lauderdale, which posted a sign saying it was out of water and not sure when new supplies would arrive.

This is #SouthFlorida right now. Cat 5 headed for us and water delivery at @Publix is "unknown". #Irma #HurricaneIrma pic.twitter.com/zmb0WO72c6

But don’t trim your trees anymore, because items left on the side of the road could cause damage when wind increases. If you live in an evacuation zone, figure out now where you’ll evacuate to, such as staying with friends or family outside of the zone. At the time of publication, Broward County was holding off on issuing evacuations.

At the time of publication, Ford Lauderdale-Hollywood International Airport and Port Everglades are operating normally. Broward County public schools will be closed Thursday and Friday.

Here is the latest forecast track on #Irma pic.twitter.com/R6uLlNaqh3

The National Hurricane Center has indicated that the Leeward Islands will get hit with catastrophic winds tonight, and Irma may reach Puerto Rico and the Virgin Islands on Wednesday night, and then the Dominican Republic and Haiti 24 hours after that. It will then move over Cuba by Friday. Beyond that, it’s tough to predict where the storm will go, but South Florida — especially the Keys — are more and more likely to be in its path.

Florida is on high alert after the damage that was done when Hurricane Harvey, a Category 4, made landfall in Texas. Irma is a Category 5.

Here’s the current long range forecast for Fort Lauderdale, according to the National Weather Service. This will likely change as the hurricane’s path becomes more predictable.

If you’re in Broward County and want to stay updated, text ALERTBROWARD to 888-777. 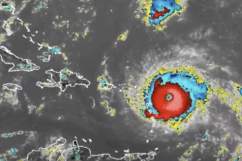