Hurricane Irma is poised to be “one of the strongest hurricanes we have witnessed in the last decade” according to Fox News, and Florida has declared a state of emergency.

In the wake of this worrisome situation, however, the internet has seen fit to take Hurricane Irma and provide some comic relief relief through a series of memes.

Of course, these memes are not referencing the damage that Hurricane Irma is predicted to inflict on Florida, but rather the many puns that users online have concocted. Once this connection was made, there was no turning back, and the meme machine has been in overdrive releasing a series of puntastic jokes.

“Irmagherd” is clearly the internet’s favorite punchline for this storm, referencing the popular internet meme. “Ermahgerd” is a phonetically captioned meme meant to sound like a speech impediment caused by the use of an orthodontic retainer, often using the snowclone template “Ermahgerd X.”

Learn more about it here, and check out some of the best “Irmagherd” memes below.

Outside of the “Irmaghered”, there’s been a plethora of content referencing Floridians who are continuing to churn out memes to cope with the hurricane that’s headed their way less than a week after Hurricane Harvey.

“Sending my friends Irma memes are my way of coping with the fact that a potential category 5 hurricane is gunna hit us”, wrote one user, while another tweeted out “I remember the times when humanity didn’t take a serious situations as a joke. Lol cant wait for memes.”

Check out some of the most notable Florida memes below.

When you was laughin at memes about Hurricane Irma bein a category 4 then it becomes a category 5 pic.twitter.com/gBKclQO8FX

When you've been making memes about Hurricane Harvey but see that Hurricane Irma comin for you pic.twitter.com/k4TsPI0fr7

CNN: "Hurricane Irma is now a monster at a Category 5"
Floridians: *continues to makes memes* pic.twitter.com/v3KNcCswrT

The former references the season three episode “Pickle Rick” by taking the catchphrase “I’m Pickle Rick!!” and turning it into “I’m Hurricane Rick!!”

#Irma why does this meme work for everything? #HurricaneIrma #Hurricane #Weather pic.twitter.com/2cqa9Rqavt 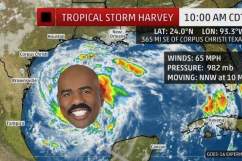 Hurricane Harvey: All the Memes You Need to See

Loading more stories
wpDiscuz
1
0
Would love your thoughts, please comment.x
()
x
| Reply
With Hurricane Irma on the way, check out these memes and hilarious Twitter reactions.