Palm trees blow in the wind as Hurricane Irma arrived into southwest Florida on Sunday., September 10.

Hurricane Irma barreled through Florida Sunday, and many feared that the sunshine state’s famous Sanibel and Captiva Islands would be “wiped off the map” due to the storm.

Irma didn’t hold back when it came to the islands. Though it is safe to say that the area was extremely lucky after footage surfaced of weather conditions before, during and after the hurricane, which has now been downgraded to a tropical storm.

Crew out clearing debris in #SanibelIsland. We made it over the causeway, which is now closed. #irma #cleanup #dayafter #florida pic.twitter.com/GYZYGHzeqf

“He said the storm could have treated the barrier island much worse after assessing some of the damages Monday afternoon,” the newspaper continued. “Captiva, to its north, faces similar circumstances. There was no evidence of structural damage, but palm fronds and tree branches were in the middle of the roadway.” 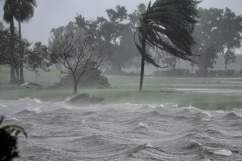 “Within the last 10 minutes, the only way to Sanibel Island from mainland was reopened after Irma had cut off access,” CBS News reported Monday morning:

Within the last 10 minutes, the only way to Sanibel Island from mainland was reopened after Irma had cut off access https://t.co/R2Us5896aD pic.twitter.com/L4HtEPFndX

Residents of the island were allowed to asses the damage after “the Sanibel Causeway passed an inspection by the Florida Department of Transportation Monday morning,” according to News-Press. Initially it was thought that those living in the area wouldn’t be able to get home until Tuesday, however officials allowed them to return Monday after “reassessing the damage.” 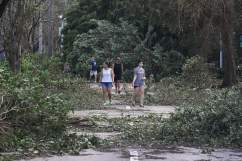 “The calm before the storm #Sanibel Island,” @iNSIDE_iDEAS stated in a tweet, as seen below. “Irma is taking aim at my little piece of paradise. Hoping she is kind.”

#Sanibel Island. The calm before the storm. Irma is taking aim at my little piece of paradise. Hoping she is kind. pic.twitter.com/QMmsVm6rd1

“Finally,” @sanibelnik wrote. “Hum of the generator, @oskarblues Daves pale ale and a nice neat @JackDaniels_US – been a long couple days time for some rest.”

Finally. Hum of the generator, @oskarblues Daves pale ale and a nice neat @JackDaniels_US – been a long couple days time for some rest pic.twitter.com/uHMgydXY9J

He also shared a post-hurricane photo of “Casa Ybel Resort,” showing damage to trees and a small structure:

Casa Ybel. Looks to be the only major damage to the property. Whew! pic.twitter.com/TvWUtkX6ER

“…We survived, everything is fine,” he stated:

@WindowToCaptiva published “post hurricane snaps” to Twitter…it appears that the villas are in fairly good condition:

The real estate professional captured other photos which illustrate the power of Irma’s winds:

See further video and photo coverage of Irma’s wrath on the islands of Sanibel and Captiva below:

NEW: within the last 10 minutes, the *only* way to Sanibel Island on Florida's southwest coast reopened. @KrisVanCleave reports: pic.twitter.com/KMIqKjNnlh

Nine deaths have been confirmed in Florida, Georgia and South Carolina in connection with Irma in the U.S. thus far, and at least 2 million people are without power. Two of the deaths include a Florida sheriff’s deputy and corrections officer whom were both killed after crashing head-on Sunday morning during Hurricane Irma in Hardee County, the Miami Herald reported. 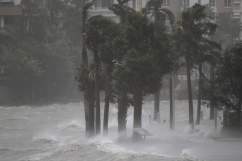