Hurricane Irma hit the U.S. Virgin Islands on Wednesday, leaving a path of destruction in its wake.

This video, shot by Coast Guard Petty Officer 1st Class Luke Clayton on Thursday, shows the enormous damage the Category 5 hurricane did to the island of St. Thomas, a popular vacation destination with about 50,000 residents.

The USS Kearsarge and the USS Oak Hill with 26th Marine Expeditionary Unit are expected to be in the region on Friday. The Defense Department said the USS Iwo Jima and USS New York are also prepared to provide additional support to the U.S. Virgin Islands and Puerto Rico.

The U.S. Army Corps of Engineers will conduct port surveys and dredging missions to re-open ports and has deployed power teams and debris removal experts in Puerto Rico and the U.S. Virgin Islands. 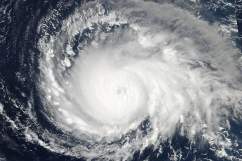 Three deaths have been reported, according to the Associated Press.