Hurricane Jose is currently a Category 1 storm and he appears to be moving further west with just about every new GFS and European model update.

According to the National Hurricane Center, Jose is not expected to make landfall in the United States, but his track just offshore will bring some rain and wind to areas in New England, including Connecticut, Rhode Island, Massachusetts, New Hampshire, and Maine. By the time he reaches Massachusetts, he will weaken to a tropical storm.

While the cone of uncertainty still suggests that Jose could trek further west, the National Hurricane Center believes that he will continue his journey in the Atlantic Ocean. From there, it’s possible that Jose will continue moving north northeast, perhaps making landfall in Halifax. Check out the map below for more.

Word to the wise…the strongest winds based on this track WILL STAY OVER THE FISH. Been burned too many times with these tropical systems. pic.twitter.com/o2HVjkc3vo

The latest GFS models for Hurricane Jose bring him a bit closer to Massachusetts. You can see a graphic of this below.

The GFS starts fine and then it says "lets make Jose a major hurricane again". Not happening. pic.twitter.com/pOoB0uA8Q7

Here's Hurricane Jose each day at 11AM starting this Tuesday on the Euro Model. Track moved West. pic.twitter.com/m4pEnLQbiL

A tropical storm warning has been issued for parts of coastal southeast New England including areas in Rhode Island and Massachusetts, including Block Island, Martha’s Vineyard, and Nantucket.

“Despite remaining well offshore, [Jose] will still produce a combination of coastal flooding, high surf, tropical storm-force winds and heavy rain along parts of the East Coast in what may end up being a glorified nor’easter, without the snow,” The Weather Channel reports.

Below is a map of when tropical-storm-force winds from Hurricane Jose will likely arrive along the east coast.

The following map shows the probabilities of areas experiencing tropical-storm-force winds from Hurricane Jose. As you can see, the nastiest weather appears to stay in the ocean. However, parts of Connecticut, Rhode Island, and Massachusetts could experience some sustained winds and some hefty gusts (up to 74 mph) in the coming days. 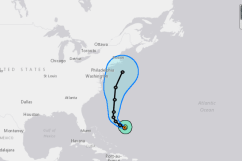