Hurricane Maria is currently 85 miles west of Guadeloupe, traveling west northwest at 9 mph. She has strengthened to a Category 5 storm with sustained winds topping 155 mph. Maria has her sights set on the Virgin Islands and Puerto Rico, according to the latest computer models.

The latest track projected by the National Hurricane Center shows Maria heading more north as she moves west, taking her into the Atlantic, basically brushing a couple of islands in the Bahamas. As you can see in the map below, Maria will hit Puerto Rico directly before sliding north over Hispaniola as a Category 4, perhaps sparing the Dominican Republic and Haiti of the worst.

Maria then moves more north — missing some of the major islands in the Bahamas — where she is expected to weaken to a Category 3. While still very powerful, Maria doesn’t appear to have the Bahamas in her direct path at this time. Many of the islands are still in the “cone of uncertainty,” but her projected path could take her away from these islands altogether, which would be an ideal situation for the people living there.

Even if Maria misses the Bahamas directly, there could still be wind and rain on the islands by the end of the week. The map below shows the absolute earliest time that the Bahamas could expect to see tropical-storm-force winds. The impacts could be felt as early as Friday morning, regardless of Maria’s track.

A storm of any kind raging through the already-battered Caribbean is very bad news. Hurricane Irma left severe devastation to many of these islands, and another storm is the last thing that anyone wants to see happen.

“Conditions may begin to deteriorate starting Tuesday in the Virgin Islands and then spread west toward Puerto Rico by Wednesday. Portions of the Dominican Republic and Haiti could see impacts from Maria begin as early as Thursday. Heavy rain will also be a threat and could contribute to flooding and mudslides. Parts of Puerto Rico and the Virgin Islands may see 6 to 12 inches of rain, with locally up to 20 inches in some areas, through Wednesday night,” reports The Weather Channel.

Many people are keeping a close eye on Maria as she path seems to change with each new advisory. The hope is that she keeps heading more north and steers clear of as many nations as possible. 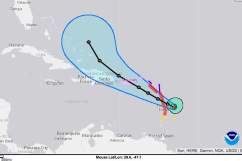 Read More
Bahamas, Hurricane Maria, Weather
wpDiscuz
1
0
Would love your thoughts, please comment.x
()
x
| Reply
Hurricane Maria is a Category 3 storm headed toward the Bahamas. They islands dodged a bullet with Irma, but may get hit by Maria by the end of the week.