NHC/NOAA The estimated times of arrival for Maria.

NHC/NOAAHurricane Maria forecast from the NHC at 2 p.m. ET.

The 5 p.m. ET advisory from the National Hurricane Center in Miami reports that the storm is moving west-northwest at 15 mph (24 kmh) and is 140 miles (225 km) southeast of Barbados. Its maximum sustained winds are at 75 mph (120 kmh).

Maria will soon be making an impact on Barbados. Barbados Today reports that the Barbados Meteorological Services issued a flood warning that will be in effect until 6 a.m. Monday. The center of the storm will pass 120 miles north of Barbados Monday morning.

“Please continue to pay attention to the radio and listen for updates, particularly those persons living in low lying or flood prone areas. Higher gusts of wind are also expected with the system as it approaches the islands,” Director of the Department of Emergency Management Kerry Hinds told residents Sunday, Nation News reports. She also told residents to contact the Royal Barbados Police Force, the Barbados Fire Service or the Barbados Defence Force to report damage.

Barbados has been an independent country since 1966, but is still a member of the British Commonwealth. According to the CIA World Factbook, the island has an estimated population of 292,336 and has a total area of 430 sq km, making it over twice the size of Washington D.C. 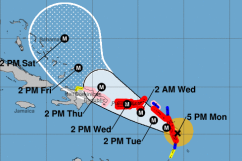 Loading more stories
wpDiscuz
1
0
Would love your thoughts, please comment.x
()
x
| Reply
Tropical Storm Maria is heading closer to Barbaods, which is under a tropical storm watch. Find out when the storm is expected to reach the island country.